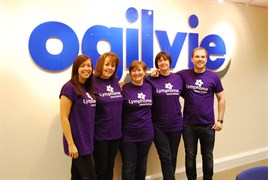 Ogilvie Fleet has donated a total of £2,000 in support of two charities to which it has connections.

The Stirling-headquartered independent contract hire and leasing specialist, which also has offices in Birmingham, Sheffield and Northern Ireland, has donated:

Julie’s husband, Dorian, was diagnosed with non-Hodgkin Lymphoma last year and after recently completing eight months of chemotherapy treatment is now in remission.

The group is hoping to raise £2,500 for the charity and Julie said: “Dorian has taken part in the Fun Run every year and we both entered last year but couldn’t take part because of his illness.

“Dorian still has a long way to go with treatment, but is definitely on the right path. I thought if he could go through all of the treatment then the least I could so was to try to complete the Fun Run this year.

“Usually the only running I do is to catch the bus, but we are all in training and are determined to finish and raise as much money as we can for a charity that undertakes fabulous work.”

Meanwhile, Ogilvie Fleet already has a close partnership with Stirling Golf Club and it was that relationship that prompted support for this year’s Fightmaster Cup.

The inaugural Fightmaster Cup between teams from Europe and the United States took place in 2008. It has since become the flagship international Ryder Cup-style match play tournament for the world’s best one armed golfers.

Like the Ryder Cup, the event is alternated between venues in Europe and the United tates every two years and is held close to that year’s Ryder Cup venue. As this year’s Ryder Cup takes place at Gleneagles 26th-28th September, the Fightmaster Cup is being hosted by Stirling Golf Club.