Used car values continued to rise in May 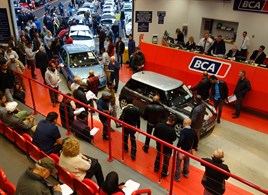 BCA’s latest Pulse report shows that the headline average value of a used car continued to increase in May, rising by £44 to a new record monthly average of £7,597.

Average performance against CAP Clean recovered by nearly a point to 96.45%, having fallen quite sharply in April.

Year-on-year, May 2014 was ahead by £552 or 7.8%, with average age and mileage broadly static over the 12 month period.  CAP Clean performance was up by more than a point, year-on-year.

For the third month running, dealer part-exchange values reached record levels, and while fleet & lease values declined marginally compared to April, the monthly average of £9,537 was the third highest on record.  Nearly-new values improved again to their highest point this year.

"As has become the norm over many months, the market remains short of good retail-quality stock and it is noticeable how the best presented, nicest specification cars in attractive colours often outperform the rest of the market by some margin.

“However, there is an oversupply of vehicles in poor condition and higher than average mileage and sellers should look closely at appraisal reports and condition ratings when setting reserve prices. Less attractive or poorly presented vehicles must be valued competitively and in line with condition in order to attract buyers and sell first time.”

Henstock added “It is worth investing in pre-sale 'smart' repairs for vehicles that have sustained minor cosmetic damage, particularly for otherwise high-demand, well-specified examples that have picked up the odd car park dent or bumper scuff during their working life.”

Fleet and lease cars averaged £9,537 in May, a fall of £87 or 0.9% compared to April but still the third highest average monthly value on record in the sector.

Values were up by £733 (8.3%) year on year, with CAP Clean performance improving by one point. The retained value against original MRP (manufacturers retail price) fell slightly compared to April to 42.77% but was up by nearly one point, year-on-year.