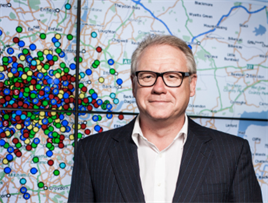 Addison Lee has appointed Colin Tenwick as Chairman, as the company looks to expand beyond London.

Colin is a highly respected figure in the technology industry with a career that has included senior executive roles at Sybase, serving as the CEO of StepStone ASA, and the Chairman of Bookatable, as well as recent non-executive roles at AVG and Chairman of Control Circle and Picsolve International.

In 2009, Colin was awarded ‘Technology CEO of the Year for a public company’ at the UK Technology and Growth Awards.

Addison Lee says the appointment 'paves the way' for expansion of its service outside of the capital.

Liam Griffin, CEO of Addison Lee, said: “We are delighted to welcome Colin as our new Chairman. He brings with him a wealth of business experience in technology, innovation and entrepreneurship, which will help take Addison Lee from a London success story to a truly international proposition. Colin will assist in the development and growth of strategic hubs in major global cities where our clients already operate.”

Tenwick said: “It’s a great honour to join Addison Lee at the beginning of this new chapter. We’ve got an exhilarating journey ahead of us, and there has never been more interest in the taxi and private transportation sector.

Tenwick’s appointment follows the announcement earlier this month that Addison Lee founder John Griffin was to step down as Chairman, he is now no longer be involved in either an advisory or financial capacity.