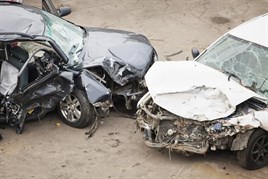 An academic is arguing that higher prison sentences could fail to act as a deterrent against ‘death-by-driving’ offences, and that it is the punishment for underlying offences that should instead be revised.

Professor Sally Kyd Cunningham from the University of Leicester’s school of law has called into question the effectiveness of two controversial new offences: ‘causing death by driving by disqualified driving’ and ‘causing serious injury by disqualified driving’, suggesting that the laws will ultimately do little to reduce the number of deaths and injuries caused in driving crashes.

Professor Kyd Cunningham explained: "It is difficult to see how any causing death by driving offence can act as a deterrent, no matter how high the sentence attached to it.

"When drivers get behind the wheel, they do not think about whether they might cause a collision or whether it is they or another road user that might be killed. Neither do they think about the punishment they might receive as a result if they survive the crash.

"If the law is to have a deterrent effect, it is the underlying offences which should receive our attention, as punishing people involved in driving collisions with higher sentences does little to reduce the chance of these crimes occurring.

"One suggestion is that driving whilst disqualified should itself attract a higher maximum sentence to act as a deterrent.  At the moment it carries a maximum of six months’ imprisonment, and is only tried in the magistrates’ court."

Professor Kyd Cunningham’s research broadly covers the fields of criminal law and criminal justice - what amounts to a crime and how crimes are dealt with by the state, including how crimes are investigated, prosecuted and punished.

She added: "Many people fail to view driving offences as ‘crimes’ unless harm is caused. It isn’t accepted that minor offences are truly criminal or wrong, because people don’t see that the mere creation of a risk of death or serious harm is in itself something we wish to avoid.

"The media is often seen to support campaigns calling for the criminal justice system to come down heavily on drivers who cause death. At the same time, however, the media often condemns the police for spending too much time and resources chasing what the media portray to be otherwise law-abiding motorists who break the speed limit or are involved in some other ‘minor’ driving offence.

"There seems to be a blind spot here; it is not seen how risk-taking that luckily fails to result in any harm is connected to cases where unluckily risk-taking has catastrophic consequences. With the offence of causing death by careless driving, otherwise law-abiding citizens might find themselves facing a serious criminal charge as the result of a moment’s inattention.