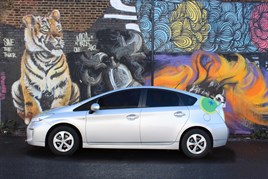 The UK’s largest minicab company Addison Lee has been labelled “unprofessional” after suspending the corporate account of a high-profile client after it decided to move to another specialist provider.

ITN News, best known for producing news programmes for ITV, Channel 4 and Channel 5, announced to employees that after June 1 it was switching its company taxi account to Green Tomato Cars.

The new cab company’s environmental credentials were understood to be a key reason for the change.

According to ITN, Addison Lee announced that, as a result of the decision, it would be suspending the account with effect from midnight on Thursday, May 22 – more than a week before the planned account changeover date.

The move left a number of staff with pre-booked minicabs without a means of transportation.

An ITN spokesman confirmed that Addison Lee had pulled the plug early on the organisation’s account, but said that Green Tomato Cars had stepped in to ensure a continuous travel service remained in place.

While the spokesman declined to comment on the exact details of the accounts with either Addison Lee or Green Tomato Cars, or the reasons behind the decision to switch, internal company memos obtained by Fleet News show that the corporate account handover date was Monday, June 2.

One of the ITN memos explained to staff: “Our decision to move to Green Tomato Cars is based on a number of factors including cost, the quality of the service and their commitment to environmental sustainability.

“ITN has acted in a professional manner throughout our dealings with Addison Lee and we are very disappointed that it has adopted such aggressive tactics in responding to our choice to move to a new supplier.”

An ITN source told Fleet News: “The company probably booked 150 cabs a week with Addison Lee, so the sudden termination of the service has left people fuming. It is very unprofessional to do this.”

The source confirmed that a number of journeys already booked with Addison Lee all had to be rebooked with Green Tomato Cars.

The ITN spokesman said: “Green Tomato Cars stepped in early because of Addison Lee’s decision. We have made sure that we have spoken to our staff about the new arrangements and there has been a seamless transition to Green Tomato Cars. We have not experienced any problems.”

The spokesman said details as to how long Addison Lee had provided a service to ITN and arrangements relating to the Green Tomato Cars account were “commercial information that we would not disclose”.

However, it was careful to describe the relationship as an account and not a contract.

Addison Lee was also reluctant to share any details relating to its dealings with ITN, instead suggesting it bore no responsibility to supply minicabs to the company.

A spokesman told Fleet News: “Addison Lee does not comment on the details of individual accounts or clients, but we are happy to clarify that the company did not have any kind of contract in place to provide services to ITN.”

Green Tomato Cars currently operates a fleet of more than 500 hybrid cars, with a pure-electric Tesla Model S due to be added to the fleet shortly.

Highlighting 40% business growth last year and targeting similar levels this year, Mike Tobin, managing director of Green Tomato Cars, said: “We have seen a number of customers make the move to us recently.

“The key is that we run London’s largest hybrid fleet, and more and more businesses are looking to choose the greener option.

“Of course, we need to offer a great service at the right price too – that cannot be underestimated – but the thing that attracts businesses to us in the first place is our reputation as a green company.”

Billing itself on its website as ‘London’s second biggest operator and natural alternative to Addison Lee’, Green Tomato Cars was launched in the capital in 2006 with a fleet of four cars.