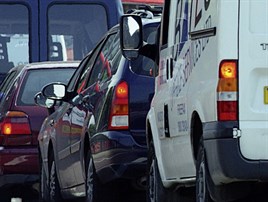 Congestion in 10 of Britain’s biggest cities has worsened over the past 12 months, new research suggests.

British commuters are now spending 10 working days a year stuck in traffic, up from nine days a year ago, based on the numbers of hours lost in congestion.

Pete Williams, head of external affairs at the RAC, said: “The nation’s roads are intrinsically linked to the economy.Businesses with fleets that operate in urban areas and across the strategic road network are most likely to feel this pain in lost time, over-management and burning fuel sitting in jams.”

The TomTom report was published soon after criticism was made over the way transport infrastructure spending is shared out across the UK.

New rules are due to take effect from 2015, but MPs are concerned that the inequalities of the past will continue to leave some regions short-changed.

Louise Ellman MP, chairman of the Transport Committee, said: “Far less money is spent on transport projects outside London than in the capital. This inequality has gone on for too long and has to change.

“For example, IPPR says that transport infrastructure spending is £2,500 per head in London compared with £5 per head in the north east.

“Even on the Government’s figures, transport spending per head in London is more than twice that in the English regions.”

The latest World Economic Forum Competitiveness Report also sees the UK slipping from 24th to 28th for the quality of its road infrastructure.

The number of on-time journeys, for which figures are available from the Department for Transport, has never been above 85% and,when looking at recent changes across the past few years, reliability is heading in the wrong direction.

However, the Government has set out a £28 billion plan for road improvements in the UK, which includes work on 178 pinch point schemes on the local or strategic road network this year.

It’s hoped the cash injection will help alleviate some of the problems, but with four million more drivers on UK roads by 2030 and traffic volumes expected to rise by 40%, technology may offer some respite.

Harold Goddijn, CEO of TomTom, said: “The traditional responses to congestion, such as building new roads or widening existing ones, are no longer proving to be effective.

The TomTom Traffic Index shows that Belfast remains the most congested city in the UK, with journey times 36% slower than free-flowing traffic throughout the day – peaking at 78% longer in the morning rush hour and 75% in the evening.

London is secomd with journey times 34% slower, rising to 63% in the evening peak. Close behind is the Scottish capital Edinburgh, where travelling during the morning rush hour takes 60% longer than at off-peak times.

Despite a slight improvement, Bristol is still the fourth worst UK city for congestion, with traffic 32% slower than free-flow. Brighton (31%) is in fifth place.

Sheffield (8th place) and Leicester (11th) have recorded the biggest increases in congestion over the past year.

Williams said: “Technology holds solutions to some of these problems.

“For example, telematics can provide live traffic feeds and alert managers of problems on the roads so they can make decisions about how best to deploy their workforce within a specific location.

“The Government also has good plans to help alleviate congestion through its Action for Roads programme. But we need to see more done, sooner, to help individual businesses and enable the whole economy to keep growing.”