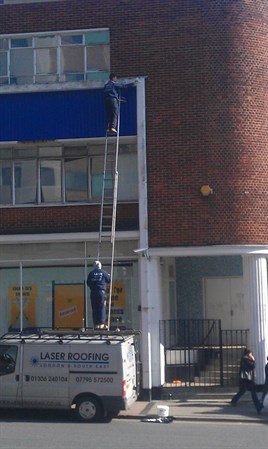 A foolhardy roofer has appeared in court after footing a double extension ladder on a transit van in order to access a third floor façade.

George Nicholls, 25, blatantly risked harming himself and others as he used the ladder to paint a shop frontage on St Marys Road in Southampton on 14 March 2013.

His reckless exploits were captured on camera by a council environmental health officer following a tip-off from a concerned member of the public.

The Health and Safety Executive (HSE) investigated and (May 23) prosecuted Mr Nicholls for safety failings alongside the company that paid him to undertake the work.

Southampton Magistrates’ Court heard Mr Nicholls, trading as Laser Roofing London and South East Roofing Limited, had been sub-contracted by Norfolk-based Maintenance 24-7 for the paint job because the company did not possess the correct equipment or expertise.

Ladders were specified as the chosen method of work, but after the finding the façade was higher than the ladder he had with him, the roofer opted to improvise.

He placed it on the roof of his van and worked from it fully-extended some eight metres above the ground with a labourer providing the footing.

The court was told this system was fraught with risk. Not only could Mr Nicholls or his labourer have fallen, but there was no form of segregation to prevent vehicles or pedestrians from passing under or near the work area. So they could have been struck by falling equipment or materials.

HSE established that the van in question was also parked over a bus stop on a busy road with double yellow lines – indicating a further lack of regard or awareness.

Magistrates heard a pavement licence should have been obtained to create a properly segregated safe-working area, and that scaffolding or a mobile elevated work platform would have provided a safer option for accessing the façade.

George Nicholls, of Hogs Pudding Lane, Newdigate, Surrey, was fined a total of £4,000 and ordered to pay £666 in costs after pleading guilty to breaching Sections 2(1) and (3(1) of the same Act.

After the hearing, HSE inspector Frank Flannery said: "The photographic evidence speaks for itself in terms of the risks created. Anyone can see the system of work is plain wrong, so why a supposedly competent roofer chose to work in this way is anyone’s guess.

"George Nicholls blatantly and recklessly risked harming himself and others, and he did so on behalf of Maintenance 24-7 Ltd, who had clear duties of their own to ensure the work at height was properly planned, managed and executed in a safe manner.

"The standards of both parties fell far below those required, and I would like to thank the concerned member of the public who initially brought the matter to the council’s attention."