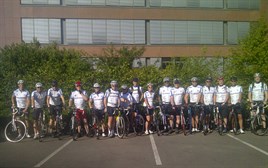 Leasedrive has raised £23,200 so far in aid of four charities - Marie Curie Cancer Care, Macmillan Cancer Support, Mencap and Scope - after a team of 17 riders covered 350 miles in four days on the 'Road to Geneva' charity bike ride between Luxembourg and Geneva.

Paul Newman, group head of IT at Leasedrive, who led the 17 riders, said: "We originally set out to raise a minimum of £10,000 so to fundraise more than double that amount is a terrific performance.

"Our thanks go to the riders, five support crew, all of our sponsors and those companies and private individuals who donated through personal JustGiving websites. We were all exhausted by the time we reached Geneva but exhilarated by the ride through the Jura mountains and the money we raised for such worthwhile causes. Marie Curie Cancer Care has been a Leasedrive client and a nominated company charity since 2005, Scope since 2006, Mencap since 2010 and Macmillan Cancer Care since 2012.

The Leasedrive Group was again a main sponsor of the ride and covered the fuel, support vehicles and cycle shirt top costs, as well as underwriting its participating employees' time-off, with each rider making contributions towards their flights, accommodation and food costs during the event.

The latest challenge saw the 18 riders climb over 16,250 feet through France and three National Parks, including the beautiful Jura mountains on the French/Swiss border. The ride started from Luxembourg on June 26, covering 103 miles to Nancy, France. Ninety-three miles was ridden on day two between Nancy and Belfort and 74 miles on day three from Belfort to Pontarlier. The final day saw 81 miles covered from Pontarlier to Geneva.

Online donations to the Leasedrive 'Road to Geneva' bike ride can be made by visiting one of the following fundraising websites: