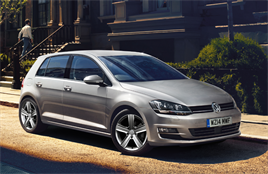 Volkswagen has replaced the Golf SE with the higher specification Golf Match.

The Match, which is the same price as the outgoing model, adds front and rear parking sensors, front fog lights, and a mirror pack including folding mirrors, puddle lamps, and reverse-activated dipping.

The model also includes a new design of 16" alloy wheels.

First deliveries are expected in September, and the Match model starts at £19,680.