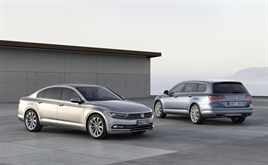 Volkswagen has revealed the new Passat, in saloon and estate variants.

The car was unveiled at a ceremony at the Volkswagen Design Centre in Potsdam, Germany.

All models of Passat have LED rear lights, while the higher-specification versions feature a distinctive horizontal tail light signature that switches over to a vertically oriented brake light signature under braking.  Headlights are halogen or LED.  In conjunction with Dynamic Light Assist, one of the two LED headlight options automatically adjusts the beam for maximum illumination of the road without dazzling other traffic.

Despite exterior dimensions that are actually marginally smaller than those of the previous Passat, interior space is improved, with more leg- and head-room, as well as increased luggage space.

Safety technology includes Side Assist with Rear Traffic Alert; Traffic Jam Assist which makes stop-and-go driving more comfortable; Emergency Assist, which can potentially halt a vehicle when the driver is incapacitated; and the latest Front Assist system with City Emergency Braking, which optionally combines both radar and camera sensors to add pedestrian detection.

Engines include a high-performance, four-cylinder, 2.0-litre, bi-turbo diesel delivering 240 PS and an extraordinary 500 Nm from 1,750 rpm.  This engine will be available only with a new seven-speed DSG gearbox and 4MOTION all-wheel drive.  A plug-in hybrid model will also be offered, with potential to travel 31 miles on battery power alone, and with a maximum range of around 600 miles.

Pricing and further details will be announced at the Paris Motorshow in October.