Fine for tailgaters having ‘limited’ impact 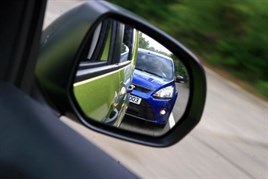 Drivers are reporting that the fines brought in one year ago to tackle careless driving are starting to have an effect, says the AA. But the motoring organisation warns that these positive signs could be stifled if the police do not enforce the measures.

The changes allow the police to issue a Fixed Penalty Notice for less serious examples of careless driving, such as tailgating and middle-lane hogging.

AA/Populus results show that nearly a third (29%) of drivers say they have modified their driving since the changes came in (16/08/13).

However, three quarters (74%) say they have not noticed a change in other drivers’ behaviour.

Paul Watters, head of roads policy at the AA, said: “Careless driving has been an offence since the eighties, but it was hoped that giving police the power to fine people for less serious examples of it would encourage drivers to change their behaviour, without clogging up the courts.

“These results show that enforcement must be a priority if these green shoots of progress are to be maintained.

“Tailgating, middle lane hogging and using a mobile phone at the wheel are the top pet hates of driver.

"Not only are they an irritant, but they are dangerous and the only real and sustainable way to curb these behaviours is through detection, enforcement and ideally with warnings and education as a starting point.”

The majority of AA members share the organisations view that a greater visible police presence will make the new law more effective.

Four-fifths (82%) say that visible policing is the only way to change driver behaviour, but there was a big split across the ages with this falling to just 66 per cent of 18-24-year-old drivers and rising to 85% of those over 65.

One in ten drivers say they see fewer examples of tailgating (12%) and lane-hogging (11%) now than they did a year ago.

Since the changes were brought in, concerns have been raised about whether the police have been using the new powers effectively.

Neil Greig, IAM Director of Policy and Research, said: “These fines were introduced to change the behaviour of drivers, which clearly has not happened in large numbers just yet.

"However, it was never going to happen overnight - so the jury is still out on careless driving as a fixed penalty offence.

"Time and time research shows that visible policing is the most valuable deterrent against careless driving.”