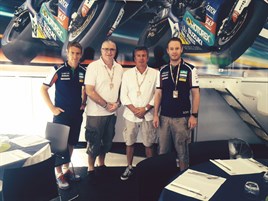 Occupational road risk manager Chris Charlton declared his all-expenses paid trip to the Spanish round of the World Superbike Championship courtesy of Sign Language as fantastic.

He jetted off to Jerez for the 10th round of this year’s Championship where he saw Italian Marco Melandri clinch a double win although the championship continues to be led by Britain’s Tom Sykes.

Fast-expanding vehicle graphics and wrapping specialist Sign Language has won a host of new vehicle livery contracts in 2014 with major organisations including Autoglass and Euro Car Parts, and also has a World Superbike Championship tie-up with Suzuki.

The company first started working with the manufacturer when it wrapped the Suzuki World Superbike team’s machines in 2012. It has since gone on to design new branding for Suzuki GB’s nationwide network of motorcycle dealers.

The trip also included flights and hotel accommodation as well as hospitality at the race meeting.

Charlton said: “It was a fantastic trip. The atmosphere at the race meeting was superb and hospitality we received was first class. It was brilliant to be able to go behind the scenes and talk to the team and drivers.”