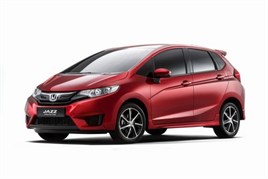 Honda has released the first images of the new Jazz prototype that will make its public debut next month at the 2014 Mondial de l‘Automobile in Paris.

Due to go on sale in summer 2015, the new European Jazz will offer improved fuel economy and higher performance thanks to its new Earth Dreams Technology engine.

The new 1.3 litre i-VTEC petrol engine is supported by either a six-speed manual (replacing the previous five-speed unit) or a CVT transmission.

The prototype introduces a completely new body shell with the length being 15mm longer and the wheelbase 30mm longer helping to create an even more spacious cabin.

As part of Honda's ‘small series' range, the third generation European Jazz will be built on the company's global compact platform.

It will retain the centre fuel tank layout that is already found in the current model, as well as the Civic and recently-announced HR-V. Honda says that this space-saving layout delivers genuine customer benefits in terms of versatility, interior practicality and storage solutions.

Honda (UK) Leon Brannan, head of car, said: "The Jazz is a hugely important car for Honda in the UK, and has been a runaway success since its original launch.  It has an extremely loyal following, its reliability is legendary.

“The new Jazz with its sleek, modern design, refined and comfortable ride, will, we are confident, build even more loyal followers."

The new Jazz is set to deliver a more refined and comfortable ride for both the driver and passengers, thanks to a new suspension system.

Further information on Honda‘s new Jazz for Europe will be announced during Honda's press conference at the 2014 Mondial de l‘Automobile in Paris, on October 2.