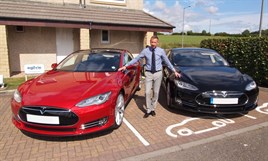 The two cars are being driven by Ogilvie Fleet directors and employees and are being loaned to customers to increase their knowledge of electric vehicles as company cars.

The independent vehicle leasing and fleet management company, which has more than 11,000 company cars and vans on its books, has installed three electric vehicle recharging points at its Stirling headquarters. Additionally, it is installing recharging points at employees’ homes.

Ogilvie Fleet sales and marketing director Nick Hardy said: “The electric vehicle market is in its infancy, but we are confident that zero emission models will have a role to play within the operating profile of some fleets.

“It is therefore important that as a leasing company we have practical day-to-day experience of electric cars and can share our evaluation with customers and their company car drivers as well as enabling them to put the models through their paces.”

Ogilvie Fleet has yet to lease any pure electric vehicles to clients - although its fleet is rapidly growing with plug-in hybrid electric petrol and diesel models - but Hardy said interest in the Tesla models was massive.

He explained: “They are the most sought after cars we have made available on our demonstration fleet for many years. Additionally, when the cars are parked at our offices people are walking in off the street asking for information about them. The Teslas are receiving a lot of attention.”

He added: “While the market for plug-in hybrids is growing - some of our own staff are selecting them as their company cars - the pure electric vehicle market has yet to take off and, we believe, will remain niche at least from a company car perspective until list prices fall, the practicality of the models increases and the recharging infrastructure expands.

“Nevertheless, we definitely plan to add more electric vehicles to our own demonstration fleet in the future because we believe that the manufacturers and the recharging companies will get to grips with those issues and pure electric vehicles will become more acceptable. Therefore, it is vital that as a vehicle supplier we have first-hand product knowledge.”

Critically, said Ogilvie Fleet managing director Gordon Stephen, who has regularly driven one of the Tesla models clocking up more than 4,500 miles, maximising the efficiency and range of the electric car was a learning experience.

He explained: “Driving at 70mph, for example, uses significantly more charge than driving at 50mph so it is important to know the length of your journey, where recharging points are prior to setting off and modify driving style to conserve charge if necessary.”

Nevertheless, he said that he was able to clock up around 230 miles from a single charge - the car has a claimed New European Driving Cycle (NEDC) range on a single charge of 312 miles - thereby mitigating perceived electric vehicle range anxiety as highlighted by many drivers in other zero emission models.

Stephen said: “With other electric vehicles limited range at less than 100 miles is an issue, but if Tesla can overcome the problem then I’m sure other motor manufacturers can.