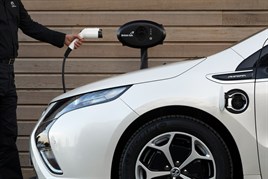 Vauxhall has confirmed it is committed to electric vehicles beyond the lifespan of its Ampera range-extender model.

Karl-Thomas Neumann, president of GM Europe, Vauxhall’s parent company, took to Twitter to deny the car was being discontinued, responding to media speculation that suggested the car had no future.

The timing suggested for the Ampera’s demise was within a normal vehicle lifecycle.

Neumann said: “After the eventual run-out of the current-generation Ampera, we will introduce a successor product into the electric vehicle segment.

“We see e-mobility as an important part of the mobility of tomorrow and we will continue to drive down costs and deliver affordability.”

A Vauxhall spokesman defended the Ampera’s record, despite slow sales in the UK and elsewhere, telling Fleet News: “At Opel/Vauxhall we take our responsibility for the climate seriously.

“Electric cars are part of that effort as they help us further reduce our CO2 footprint.

“The Ampera has given the image of our brands a significant technological boost and the car soon became the benchmark for new electric cars coming on to the market, including those from premium German brands.

“The Ampera is still a fantastic car – absolutely up-to-date. After the eventual run-out of the current-generation model, we will definitely introduce a successor product in the electric vehicle segment and continue to defend our position as an innovation leader.

“The next electric vehicle from Opel/Vauxhall will be part of our massive product offensive – with 27 new vehicles in the 2014-2018 time frame. We will not comment further on our future product portfolio.”

The Ford Focus Electric, launched in 2013, has had a very slow start, although in North America the manufacturer offers petrol-electric powertrains in the C-Max and the domestic version of the next Mondeo.

Volkswagen has a range of alternatives, with the pure-electric E-Up and E-Golf, with high-performance plug-in hybrid technology in the forthcoming Golf GTE.

Audi will also produce a plug-in hybrid with the same powertrain in the A3 E-tron.

Nissan sees the future in providing customers with a range of powertrains while remaining committed to the pure-electric technology of the Leaf.

The Leaf has been the world’s best-selling battery electric vehicle, and there is speculation that the second-generation model will have a substantially longer range than the current car.

While Nissan offers hybrid technology in some markets, the company says it is too early to say whether anything in the current UK range could eventually be offered with an ultra-low CO2 powertrain.

A spokesman said: “Nissan will deploy hybrids, downsized turbochargers, stop-start systems, clean diesels and fuel cells, as well as a range of EVs, to achieve our goal of sustainable mobility.”

Mitsubishi has been a small player in the UK fleet market in recent years, but was the first to offer a new-generation battery electric model in the i-Miev. In July, its Outlander PHEV took more plug-in car grants than any other model.

A spokesman said: “These vehicles are very much characterised according to the environments they operate in.

“With improving infrastructure in urban areas, the pure-electric vehicle will have a role, but for city-to-city travel plug-in hybrid technology is more appropriate because you have the internal combustion engine offering greater range than is possible for most battery electric vehicles.”

He added that there are Mitsubishi fleet customers running both the i-Miev and the Outlander PHEV, and that it is still possible to buy the i-Miev in the UK.

Martin Ward, manufacturer relationships manager at CAP, said he believed the mix of powertrains could be confusing for used car buyers.