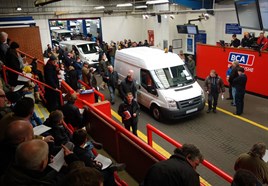 Average values for light commercial vehicles rose in December, as the ongoing shortage of good quality used vans, combined with the shorter trading period in the run up to Christmas, kept values high.

The average value of a van sold at BCA in December was £5,870, the highest monthly value on record.

Demand remained strong for any vehicle offered with the combination of a good colour, specification and condition, and interest continued for panel vans suitable for parcel delivery and courier work well into December.

Fleet and lease values increased over the month, while part-exchange and nearly-new values were static.

Year-on-year values remain ahead by £559 (10.5%), with age and mileage falling. Performance against CAP was down by three-quarters of a point compared to 2013.

“For the third month running, year-on-year values across the board were up by around 10% as the relative shortage of retail quality LCVs continues.

“Looking ahead we expect this general pattern to be maintained in 2015 while stock remains in short supply.

“With the parcel delivery and courier sector growing rapidly as the digital shopping revolution continues, we expect values for panel vans of all types and capacities to remain at a high level.

“The pre-budget announcement suggested that major infrastructure projects, road network improvement schemes and house building projects remain on the table, and this will be a boost for the civil engineering and construction industries.”

Values for fleet and lease LCVs averaged £6,859 in December – the second highest monthly value on record and an increase of £279 (4.2%) over November’s value.

CAP performance averaged 100.3% and retained value against manufacturer recommended price increased to 38.38%. Year-on-year, values were up by £190 or 2.8%.