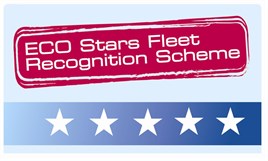 Fleet operators wanting to reduce their impact on the environment, while also benefitting the bottom line, are being urged to become ‘Eco Stars’.

However, the programme is predicted to grow further as it becomes more widely available, since it was first launched more than five years ago in South Yorkshire.

Glasgow and South Lanarkshire are also due to launch soon, with three more regions in the pipeline, and the scheme has also been introduced on the continent as a result of European Union funding. In the UK, it receives funding through a variety of different channels, including the British and Scottish governments.

“Eco Stars has come a long way since a small group of people in the South Yorkshire authorities wanted to find a way of working with commercial fleet operators to reduce emissions,” said scheme manager Ann Beddoes, from Barnsley Metropolitan Borough Council.

“We now have some of the biggest names in logistics on board, all the major supermarkets, and many more smaller operators, whether they specialise in transport and  deliveries or when it’s just part of their business.”

Consultants Transport and Travel Research (TTR), which is also one of 13 partners providing best practice advice under the European Commission’s Clean Fleets project, manages the initiative on behalf of local authorities across  the UK.

It employs experts to provide advice on how operators can ‘green’ their fleet operation.

On joining, fleets are awarded an Eco Star rating – ranging from one to five stars – based on an assessment of their current operational and environmental performance.

Fleet managers are then provided with a road map  that outlines the consultants’ findings along with tailor-made advice to help improve efficiencies and progress via  assessment up the Eco Stars ladder, with the ultimate aim of achieving a five-star ranking.

Beddoes explained: “Eco Stars can have a direct impact on reducing vehicle emissions, and hence local air  quality. And from an operator’s standpoint, they gain  independent advice about how they can improve their fleet efficiency, reducing fuel consumption and, ultimately,  influencing their bottom line.”

Eco Star members include small, local businesses as  well as some of Britain’s best known companies, which  have vehicles based in, or operate regularly in,  the areas running schemes.

Companies that have signed-up include: Alliance Boots, Amey, Asda, Dairy Crest, DHL, Greggs, Morrisons, Next, Sainsbury’s and United Biscuits. Morag White, Eco Stars’ field consultant for the north, said: “It is amazing how much companies spend on vehicles and fuel without considering how this can be reduced through planning. This is where Eco Stars can come in by helping to support when fleet management is not the primary task.”