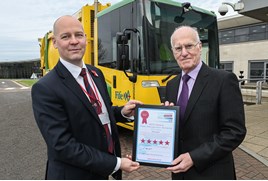 Fife Council has become the first council in Scotland to be awarded a five-star operator rating from Eco Stars.

The local authority first joined the Eco Stars Fleet Recognition Scheme in 2014 and pledged to improve its vehicles and operational practices as part of a road map to more efficient and cleaner operations in Fife.

At its original grading, Fife Council achieved four stars. Since then, a number of initiatives have been put in place to increase the environmental credentials of the organisation which have resulted in this rise to the full five-star rating.

Some of the changes include:

Ross Vettraino, convener of the environment, protective services and community safety committee said: “Fleet is an expensive but vital element in delivering frontline services to the community.

"Since joining the Eco Stars scheme, the council has been continually improving the operational efficiency of its fleet by way of reductions in fuel consumption and in the size of the fleet and the introduction of low carbon vehicles.

“The benefits of so doing include a reduction in air pollution in terms of nitrogen dioxide and particulate matter, as well as a reduction in carbon dioxide, and cleaner air means improved public health.

"These measures clearly demonstrate the council’s ongoing commitment to environmental improvements and sustainability.”

Scotland’s Eco Stars manager Mark Cavers said: “We are pleased to announce that Fife Council is the first Scottish local authority fleet to be awarded the maximum five stars rating on Eco Stars.

“This is testament to the council’s dedication to Eco Stars and its emphasis on fleet efficiency improvements.

"This award recognises Fife Council’s real commitment to improving air quality and they are setting the standard for other fleet operators in Fife”.

NHS Fife aims to save £100,000 a year through new Enterprise Car Club

NHS Fife is aiming to save more than £100,000 a year after teaming up with rental firm Enterprise Car Club to launch a car club.