Simplified toll system could save time and money 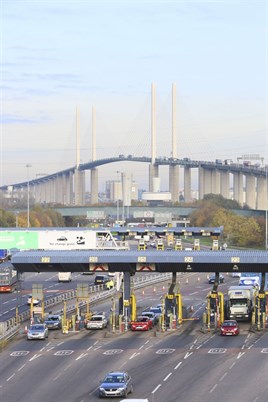 A single, centralised system that held vehicle data for all road charging schemes could help cut fleet administration and save time and money.

ACFO, the representative body for fleet  decision-makers, is calling for payments made by fleets to the recently-revised Dartford Crossing as well as the London Congestion Charge, Severn River Crossing and M6 Toll to be managed centrally.

The suggestion comes as fleet managers continue to get to grips with the free-flow Dartford Crossing payment scheme.

Neither ACFO or the British Vehicle Rental and Leasing  Association (BVRLA) have reported any issues from members as a result of the Highways Agency's removal of toll booths at the end of November, although a number of fleets have told Fleet News about teething problems when getting vehicles registered.

ACFO chairman John Pryor reiterated the organisation’s concern that it is causing a significant increase in administration for fleet managers.

He told Fleet News: “It is the time and effort of managing each charging system that is an administrative burden for fleet managers.

“The crossing charge is relatively small in each case, but a failure to keep on top of the administration and the costs – financial and time – escalate rapidly.”

The new system enables fleets to open a pre-pay Dart Charge commercial account giving them a saving of up to a third on every crossing.

Critically, organisations must keep it up-to-date to ensure new vehicles are added and defleeted vehicles removed immediately, to avoid the risk of fines or an inadvertent payment.

Highlighting that the Driver and Vehicle Licensing Agency (DVLA) could perhaps manage a centralised database as it already held all vehicle data, Pryor continued: “We would like to see one centralised database that fleet managers need to keep up-to-date with vehicle data and in credit, with an account debited by the operator of each charging scheme. Fleets would need to have a solution in place to recharge private use.”

However, it was unable to provide details on the split of fleet and private accounts.

Fleet News revealed that one month after toll booths were closed on the Dartford Crossing, the Highways Agency was chasing 300,000 motorists for failing to pay under the new system (fleetnews.co.uk, December 31, 2014).

On average between 100,000 and 120,000 chargeable crossings of the River Thames are made per day with non-payment of the new Dart Charge currently running at 15%.

Some drivers have criticised the Highways Agency for failing to advertise the new payment scheme adequately.

David Steane wrote on fleetnews.co.uk: “I used the crossing the week it all changed and it was not displayed very well.

“A customer told me to go online and pay otherwise I would have been one of those people not paying.

"On my way back I looked for signs, but I did not see any. I don't think that the change-over has been handled very well.”

However, the Highways Agency launched a £1.1m information campaign to help people prepare for the changes.

Drivers without an account can pay online, by phone or at one of thousands of payzone retail outlets nationwide, either in advance or by midnight the day after they have used the crossing.

Payment can also be made in advance by post and crossing charges apply daily between 6am and 10pm.

Fines are being issued to offenders, but the Highways Agency said that the first penalty charge notice issued for each vehicle will include a warning letter giving the driver an extra 14 days in which to pay their original crossing charge without a penalty.

Any further crossings made in that vehicle can also be paid at the standard rate, as long as payment is received within the same 14-day period.

A Highways Agency spokesman said: “We have no plans to stop issuing warning letters to registered owners of vehicles for the first case of non-payment.”

The penalty charge for non-payment is £70, reduced to £35 if paid within 14 days and increased to £105 if paid after a charge certificate has been served.

The spokesman said penalty charge notices “were not designed to generate revenue”.

He added: “They are used to encourage compliance with the Crossing charge and to give drivers the opportunity to pay.”

The Highways Agency was unable to provide details on how many penalty charge notices have been issued and what the fine payment rate was, but promised figures would be issued in the future.

It also said that the cost of enforcement against non-paying drivers is difficult to calculate as it depends on the number of cases being processed and the level of enforcement, which can range from a penalty charge notice being issued to county court action and enforcement agents ultimately seizing vehicles.

BVRLA chief executive Gerry Keaney said: “The Highways Agency has been taking a lenient approach to Dartford Crossing users while the new Dart Charge payment scheme is being introduced.

“Anyone who has received a penalty notice should therefore visit the Dart Charge website or call its helpline.

“We have been recommending that all fleets sign-up for a corporate account and take advantage of the Dart Charge discount and resulting administrative savings.”

Of the 164,000 multi-axle goods vehicles that have signed up for accounts, almost half are foreign registered.

The Highways Agency said no figures were currently available relating to the split of non-payers between UK and foreign-registered vehicles, but they would be available in due course.

The requirement to pay Dart Charge applies equally to all drivers and the spokesman said the Highways Agency had “effective enforcement arrangements” across Europe – a debt collection agency is used – and added: “Foreign account take up has been really good and reflects the mix of vehicles that use the crossing every day.”

The 'free flow' scheme is designed to reduce traffic congestion on both sides of the crossing and the Highways Agency says average journey times between 7am-7pm have been cut by more than nine minutes southbound and more than four minutes northbound compared to when drivers stopped at barriers to pay.

Meanwhile, work to remove the old toll booths and improve the road layout on approaches to the crossing will continue until the spring.