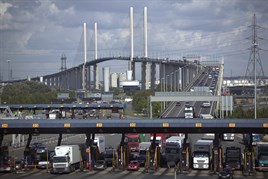 Dart charge payment rates have improved, but almost one in 10 motorists are still failing to pay to use the Dartford Crossing and more than 18,000 foreign drivers are being targeted for non-payment.

The Highways Agency says that more than 90% of chargeable journeys made during December have now been paid for, which is up from the 85% recorded at the end of December.

It issued 130,306 Penalty Charge Notices to drivers who used the crossing in December without paying, which has resulted in a further 73,898 payments being received.

First time contraventions include an offer of an extra 14 days to pay the crossing charge without penalty.

The Highways Agency said that 18,716 cases have been passed to a European debt recovery agency for issue to overseas drivers.

Highways Agency project director Nigel Gray said: “These figures show our approach of offering drivers an extended period to pay any vehicle’s first crossing charge is getting the right results.

“The vast majority of drivers are paying Dart Charge and each day this continues to rise.”

More than 570,000 Dart Charge accounts have now been set up, at a rate of more than 2,300 a day, meaning more than 1.5 million vehicles are now eligible for discounted journeys at the Dartford Crossing.

Gray continued: “It’s great that well over half a million drivers have registered for a Dart Charge account and are benefitting from discounted crossings. This means that in many cases drivers are paying less to use the Crossing now than before Dart Charge was introduced. I urge anyone who uses the Crossing more than a couple of times a year to sign up for an account and benefit from savings.”

Dart Charge was introduced on November 30, 2014, to help speed up journeys at the Dartford Crossing by removing the need to stop at a barrier to pay the crossing charge.

Instead, drivers can pay online, by phone or at one of thousands of retail outlets nationwide.

Drivers with a pre-pay account are eligible for discount of up to a third on every crossing they make. The Highways Agency says that 445,181 more drivers are benefitting from discounted journeys than before the introduction of Dart Charge, – including at least 8,776 more local residents from Dartford or Thurrock.

For drivers without a pre-pay account, payment needs to be made by midnight the day after each use of the crossing.

Drivers are responding positively to this approach with up to 71% of crossings paid following receipt of this first PCN, says the Highways Agency.

It argues that its approach aims to strike the right balance between being absolutely clear about the need to pay the charge while giving drivers the maximum opportunity to avoid a penalty.