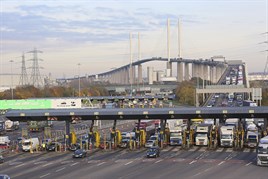 One month after toll booths were closed on the Dartford Crossing, the Highways Agency is chasing 300,000 motorists for failing to pay under the new system.

Around two million crossings have been made during the 6am-10pm chargeable period, since the new scheme – Dart Charge – was launched on Sunday, November 30.

But despite the majority of motorists successfully registering to pay, figures suggest that around 15% of crossings have not been paid for – the equivalent of 10,000 per day.

Fines are now being issued to offenders, but the Highways Agency said that the first penalty charge notice issued for each vehicle will include a warning letter giving the driver an extra 14 days in which to pay their original crossing charge without a penalty.

In addition, any further crossings made in that vehicle can also be paid at the standard rate as long as payment is received within the same 14-day period.

One million vehicles are now registered to Dart Charge accounts with journey times showing improvement, according to new data released by the Highways Agency.

Early data suggests average journey times between 7am and 7pm have been cut by more than nine minutes southbound, and more than four minutes northbound, when comparing the first two weeks of December and the end of November.

Gray said: “The introduction of Dart Charge has been a big change so it is great that the vast majority of drivers have paid the charge.”

Under Dart Charge, drivers no longer pay the crossing charge in cash at a barrier. Instead, they pay online, by phone or at one of thousands of payzone retail outlets nationwide, either in advance or by midnight the day after they have used the Crossing. Payment can also be made in advance by post.

The quickest and easiest way to pay Dart Charge – including paying for outstanding crossings – is online, according to the Highways Agency.

The Dart Charge website works on almost any device, smartphone or tablet and can be found by clicking here.