Drivers unaware of risk of driving in ‘red X’ lanes 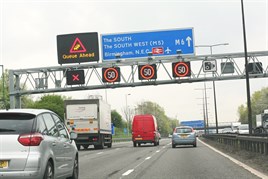 Almost a third of motorists do not know what to do when they see a ‘red X’ sign displayed, a survey suggests.

The Highways Agency asked 4,156 people in its National Road User Survey about the red X sign; 68% understood that a red X means the lane beneath the sign is closed, but only around one in twelve said they would stop if they saw a red X.

The survey also showed that a significant number of drivers do not understand the legal implications of driving through a red X. More than one-third (39%) said they did not know it was against the law.

The design of smart motorways includes controlled lanes, – sections of motorway where the hard shoulder is open to traffic at peak times, during congestion, or where it is fully converted to a permanent running lane. The first smart motorway came into operation on the M42 between junctions 4 and 7 in 2006.

Jamie Hassall, Highways Agency national enforcement coordinator, said: “It is pretty simple: if you see a red X, don’t drive in that lane.

“If you do, you could collide with a broken down vehicle, or with a traffic officer, emergency service crew or recovery operator working in that lane.”

In a separate poll, the AA found that a third of drivers would continue in a red X lane – until they saw the reason for closure.

Another third would move into an adjacent lane,  but then move back if the red X lane appeared to be moving more quickly.

Edmund King, AA president, said: “Drivers who ignore the red X are not only putting themselves and the lives of other motorists at risk, but are also risking prosecution.”

A red X sign was displayed over lane one of the M25 for 10 minutes in November last year to allow recovery of a broken down light goods vehicle (LGV). CCTV cameras observed 145 vehicles failing to comply with the red X, and risking a collision with the stationary vehicle and the traffic officers recovering it.

Hassall said: “Complying with the Red X, as most drivers do, means our traffic officers, road workers and emergency services can attend to incidents and reopen lanes more quickly.

“We urge all drivers to play their part in keeping our motorways flowing and safe by taking responsibility for their own safety and that of others.”

The Highways Agency is working with police forces in England to promote the enforcement of red X non-compliance through the use of mobile patrols. Hertfordshire Constabulary, Surrey Police and Kent Police are among those actively engaging in red X enforcement.