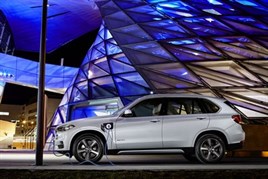 Its combustion engine and the electric motor, which together generate a total system output of 313hp, provide combined fuel economy of up to 85.6mpg and a combined electricity consumption of 15.3kWh. CO2 emissions are 77g/km.

Short journeys in urban areas can be completed on electric power alone, while in all-electric drive mode, the vehicle is capable of a top speed of an electroncially-limited 75mph.

The X5 xDrive40e goes on sale autumn 2015. Prices will be announced at a later date.