The average price of a de-fleeted car at auction stood at £7,319 in February 2015, according to Manheim’s latest Market Analysis.

Despite a slight decrease of just £39 compared to prices achieved in January, the value of ex-lease and contract hire cars is still £243 higher than in February 2014.

This annual appreciation in value is attributed to a marked decrease in both average age and mileage of cars at auction.

Daren Wiseman, valuations service manager at Manheim, said: “There might have been a slight softening of values across the first two months of this year, but overall prices are at their highest point since May 2014.

“In the months ahead, I’d expect values in the sector to be affected by the twice-yearly plate change; the first of which happened on March 1.

“Usually after a plate change, we see an influx of good-quality stock enter the market place and this can certainly shape selling prices in the market.

“Last year, we saw a volume increase of 25% following the March plate change and that could well happen again in 2015.

“Easter is earlier this year, taking place on the first Sunday of April, and should be a source of optimism for the de-fleet sector as it’s often proved to be one of the busiest weekends of the year.”

Taking a closer look at the figures, four of the 10 vehicle types analysed saw an increase in value month-to-month across February.

The largest such increase was found in the 4x4 segment, with average values increasing by £479. 4x4 vehicles also achieved the biggest yearly increase of value, with prices rising by £1,313 to £14,560.

Demand for ex-fleet vehicles has also seen a swift upturn in February, with units spending 22 days in stock – 9 less than January.

Wiseman concluded: “It’s a reassuring sign for the de-fleet sector that values have remained largely consistent throughout the first two months of 2015.

“The upcoming Easter break and bank holidays are cause for further optimism.

“The full-effect plate-change will have on volume and conversion rates is yet to be seen, but I’m confident of a relatively busy and fruitful spring for the de-fleet sector.” 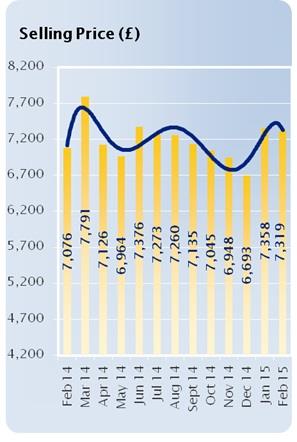