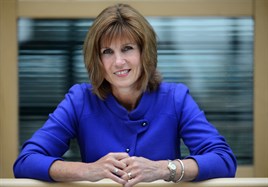 Targeted and bespoke driver education, based on data from the growing use of telematics within fleet operations, is critical to improving road safety.

That’s the message to fleets from Sarah Sillars (pictured), the new chief executive of the Institute of Advanced Motorists (IAM), who also wants more company bosses to recognise that promoting road safety in the workplace makes business and financial sense.

Sillars, who was previously at the helm of the Institute of the Motor Industry and more recently Semta, the skills council for engineering and advanced manufacturing, says helping to cut the number of road deaths and serious injuries involving someone at work is key for the organisation.

The road safety charity has more than 90,000 members, all intent on improving their own motoring skills or driving through reform to improve road safety. It also provides independently audited driver and rider training, including the advanced test.

However, it is probably better known to fleets via its occupational driver risk management arm, IAM Drive & Survive.

Sillars says the subsidiary has endured a “challenging time”, along with its competitors, due to what she sees as an element of complacency around corporate road safety.

IAM research suggests that more than a third of businesses do not have driver risk management on their radar, and 70% of employees who drive have never been offered any risk-related training despite the numerous business benefits, including boosting a company’s bottom line due to cheaper insurance, fuel savings and cutting vehicle downtime.

“There must be a compelling argument,” said Sillars. “It used to be corporate social responsibility, but now the focus has moved to the enormous business benefits if drivers are de-risked.”

A Fleet News poll revealed that ‘duty of care’, and ‘cost control, were both ranked the number one priority for fleets in 2015, each receiving 31.6% of the vote.

Sillars continued: “Standards have to be set from the top in any organisation, so it depends on the conviction of the leaders of the business to make sure the road safety message is delivered further down the line.”

Suggesting that there was “a huge amount of work to do”, she said motor manufacturers had made vehicles safer in terms of occupant protection, as well as improving pedestrian-friendliness, but added: “The same rigour has not been applied to drivers, who are perhaps too reliant on the vehicle to keep them safe.”

Sillars shares the views of MPs that telematics could provide the impetus to drive forward improvements in corporate road safety and IAM Drive & Survive is set to launch a driver behaviour training package with telematics provider Lightfoot. This will see drivers offered one-to-one coaching sessions, followed by in-cab feedback from Lightfoot’s device.

“There is nothing more engaging than employees having an intervention tailored to how they are driving rather than taking part in a generic programme,” said Sillars.

“We believe in a continuous improvement in driver skills, which will reduce risk and improve the competence, of drivers. If the right culture and policies are in place then employers should be solving the problem.”

The IAM published its ‘driver risk management manifesto’ late last year, in which it said the “best companies recognise the impact of safe driving on profits”.

Sillars said it is vital to encourage more chief executives, managing directors, financial, procurement and HR directors and fleet managers to “embed the whole issue of road safety” within their corporate policies.

The charity recognises that the perceived cost and complexity of dealing with driver safety is a worry for many SMEs. It will be launching a driver risk management shop in the next few weeks, giving small businesses access to an online risk assessment and other related products.

But recognising government also has a key role to play, Sillars said: “The Government must move road safety much higher up the political agenda.”