More than half of young drivers use a phone whilst driving 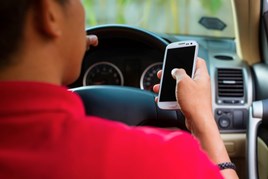 A new survey by Brake, the road safety charity, and Direct Line reveals 25-34 year olds are taking huge risks by using their phone whilst driving.

More than half (55%) of 25-34 year old drivers questioned admitted they had sent or read a text message on their mobile, while behind the wheel of their car, in the last year.

Despite it being illegal to use a hand-held mobile phone at all while driving, more than four in 10 (42%) revealed they send or read messages at least once a week.

One in five young drivers (18-24) confirmed they regularly text and/or instant message when they are behind the wheel.

Just under half of drivers (49%) aged 25-34 admitted they sometimes go online or use apps (other than sat nav apps) while driving. Almost a third of drivers in that age group said they do that several times a week at least.

Reading and writing messages – whether texting, emailing or using apps or social networks – while driving is even more distracting than talking on a phone, as it takes your mind, hands and eyes off the road. Research by Brake showed texting drivers’ reaction times are 35% slower and they also have poor lane control.

A study of in-vehicle video footage estimated that 22% of crashes could be caused, at least in part, by driver distraction. It also showed that drivers who perform a secondary task at the wheel are two to three times more likely to crash.

Zoe Carvin, a 42-year old teacher and mum of two, was killed when a 26-year old lorry driver ploughed into a queue of traffic because he was reading a text message.

Her husband Paul Carvin said: “When Zoe died it was because someone did something stupid. It was such a pointless death. Her death affected hundreds of lives. Two children have been brought up without a mother, 30 children lost their teacher, a driver has been jailed for three years; his life will never be the same either.

“Crashes like this devastate families. They are entirely preventable.”

Alice Bailey, campaigns and communications adviser for Brake, said: “Younger drivers, especially those aged between 25 and 34, simply aren’t getting the message about the dangers of using a mobile phone while driving.

“Doing any other complex task while driving hugely increases your chance of crashing. We’ve seen recent examples of drivers who have crashed while trying to play games like Pokémon Go or posting Snapchat images while behind the wheel. These drivers are putting their own and other people’s lives in grave danger by taking this risk. If a phone has to be used as a sat nav, it must be programmed before setting off on the journey and properly secured. There is no other acceptable way to use a phone while driving.”