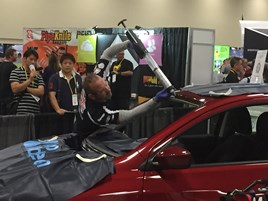 Abrahams competed in the ‘large-size company’ category at the international event, which was held from 5 to 7 October, alongside colleague Paul Gilbert. He made the final after impressing judges in the heats with his expertise and technical skills.

Both Abrahams and Gilbert were selected to represent Auto Windscreens at a global level after being named champions of the company’s internal Clearly the Best 2016 competition.

Abrahams said: “As the only UK competitors, we were welcomed with open arms and I am so pleased to have been named one of the top three. We knew there would be some strong competitors and the heat was tough, especially as we had to align our work to US standards, which are different to the UK’s. It proved good preparation for the final where concentration and focus were needed at all times.”

Rupert Armitage, Auto Windscreens’ managing director, added: “We are all incredibly proud of the achievements at Auto Glass Week 2016. Both candidates performed amazingly under immense pressure.”