Connected and autonomous vehicles will improve quality of life for people with limited mobility, finds SMMT 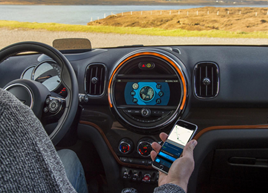 Connected and autonomous vehicles (CAVs) will transform the lives of six out of every 10 people in the UK, according to new research published today by the Society of Motor Manufacturers and Traders (SMMT).

Connected and Autonomous Vehicles: Revolutionising Mobility in Society, the first UK-based study of the human impact of CAVs, canvassed the views of more than 3,600 respondents and found that this new technology will offer freedom to some of society’s most disadvantaged, including those with disabilities, older people and the young.

The research, conducted with Strategy&, PwC’s strategy consulting arm, shows CAVs have the potential to significantly reduce social exclusion. Six out of 10 (57%) people surveyed said this new technology would improve their quality of life. For young people, the impact could be even greater, with 71% of those aged 17 to 24 believing their lives would be improved. Consumers are increasingly seeing the benefits of CAVs, with 56% feeling positive about them. Young people were most excited, with almost half (49%) saying they would get into a CAV today if one were available.

Automatic braking and parking and the car’s ability to self-diagnose faults were cited as features most likely to reduce stress – the biggest attraction of owning a CAV among all groups. Freedom to travel spontaneously and socialise with friends and family were also seen as life-changing benefits, with 88% of people who believe CAVs will improve their social life saying a CAV would help them get out of the house more regularly.

Mobility is a challenge for many young people, with more than a quarter (29%) saying the cost of car ownership, particularly high insurance premiums, restricts their freedom. All groups cited the frequency of public transport as a barrier. More than two in five (43%) also cited the high cost and infrequency of public transport (33%) as a restriction. The potential for saving money, therefore, was highlighted as a key benefit of connected and autonomous vehicles.

Mike Hawes, SMMT Chief Executive, said, “The benefits of connected and autonomous vehicles are life-changing, offering more people greater independence, freedom to socialise, work and earn more, and access services more easily. While fully autonomous cars will be a step change for society, this report shows people are already seeing their benefits. The challenge now is to create the conditions that will allow this technology to thrive, given how it will deliver wider societal advantages.”

Although fully connected and autonomous vehicles aren’t expected to become mainstream until 2030, most new cars are now connected via sat nav or Bluetooth, and more than half are available with safety systems such as collision warning or autonomous emergency braking.

The connected car has the potential to revolutionise the car rental industry, according to Avis Car Rental UK’s latest report.

Increasing sophistication of car and van technology offers a range of benefits, but there are still challenges which need to be overcome.

A recent study carried out by Satrak Plant Security has found that at least 59% of the public believe vehicle hacking will soon be a problem for connected vehicles.