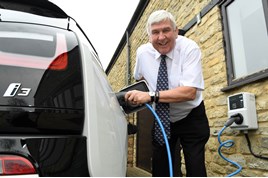 The initiative is part of a trial to see how smart chargers can help address the challenge of increasing number of electric vehicles (EVs) on local electricity networks.

It is seeking to recruit 500-700 people buying or leasing new electric vehicles (of all makes and models, pure electric and plug-in hybrids) to take part in the trial.

The UK Government has ambitious targets for the uptake of EVs, and sales are currently increasing at a rapid rate. An electric vehicle can more than double the demand on the local electricity network from a home when charging at peak times. If many homes in a local area adopt EVs, and they all charge at peak times, then the local electricity network will need greater capacity and intelligence.

Electric vehicles could create an additional peak electricity demand of up to 30% according to one scenario in National Grid’s recently published ‘Future Energy Scenarios’ (FES).

The costs to reinforce such local networks – through replacing cables, overhead lines or substation equipment – has been estimated to be at least £2.2 billion by 2050. However it is expected that such costs could be reduced by the widespread adoption of smart chargers by customers willing to be flexible about when, or how quickly, their cars are charged.

Motorists taking delivery of a new electric vehicle are being invited to join the 'Electric Nation' project and receive a free 'smart charger'.

Evolt is providing smart electric vehicle chargers for Electric Nation, a trial that aims to understand the impact recharging has on power networks.