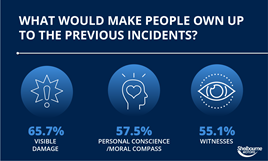 Of the 1,000 people asked, 40% said they wouldn’t think twice about driving away after scratching or keying a car, with half of the offenders aged between 25-34.

Whereas only 6% of those aged 65+ admitted to a hit and run.

The research, conducted by car dealer Shelbourne Motors, found that 60% of drivers would apologise if there was visible damage leaving a large 40% willing to flee the scene.

It found the most and least popular reasons of why people would own up to hitting another vehicle:

Shelbourne Motors’ group marketing manager Ronan Marshall said: “We were particularly shocked by how many members of the UK public would drive away after causing a collision, what really stood out to us was the fact that 10% wouldn’t admit to any type of accident, regardless of whether damage was caused.

“We also found it interesting that visible damage was the main reason for leaving details and that witnesses wouldn’t really encourage drivers to stick around after an incident.

"The research also suggest that you are better to have an altercation with an older driver as they are more likely to leave details, with 50% of people aged 18-34 admitting they would just drive off.”