Mercedes C-Class is most stolen and recovered vehicle in 2017 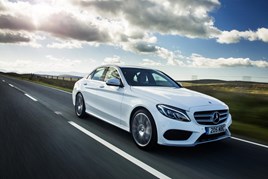 Tracker has revealed the 2017 league table of top 10 most stolen and recovered vehicles, placing the Mercedes-Benz C-Class in pole position.

The BMW X5, which previously held the top spot, drops to second place.

Volkswagen has entered the league table for the first time since the report was first published in 2011, with its Golf in ninth position.

The Mercedes-Benz E-Class rises from fifth to fourth place, followed by the BMW 3 Series moving from sixth to fifth.

The Land Rover Defender has disappeared from Tracker’s league table this year, having featured in the top 10 for the first time in 2016.

Also proving less desirable among thieves is the Range Rover Vogue, which is no longer featured in the league table. The Land Rover Discovery placed sixth.

Vehicle thefts and recoveries increased by 5% year-on-year in 2017, with the total value of vehicles stolen recovered in 2017 exceeding £12.5 million.

Andy Barrs, head of police liaison at Tracker, said: “It’s fair to say that criminals continued to stay one step ahead of manufacturers in 2017.

"Relay attack is one method car thieves increasingly adopted last year, which involves two criminals working together using an electronic signal relay to intercept a key fob signal from within the victim’s home.

"Cars are being stolen and driven off within seconds.

“80% of all vehicles stolen and recovered by Tracker in 2017 were stolen without using the owner’s keys, quite a significant increase from the 66% stolen by this means in 2016.  Of course, a Tracker device won’t prevent your vehicle from being stolen, but if it is, it will significantly increase the chances of the vehicle being recovered quickly and returned by the police.”

Thieves of £110,000 Rolls-Royce thwarted by Tracker

Tracker vehicle recovery saw the safe return of a stolen Rolls-Royce phantom worth £110,000, in less than two hours.

Tracker has launched its S5 Plus stolen vehicle recovery system which is designed to protect motorists from the rising threat of GPS/GSM 'jamming' technology.