Thieves of £110,000 Rolls-Royce thwarted by Tracker 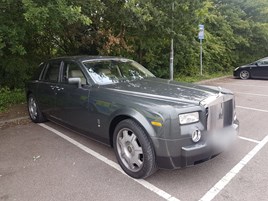 Tracker vehicle recovery saw the safe return of a stolen Rolls-Royce phantom worth £110,000, in less than two hours.

The customer, based in the Midlands, had his Phantom stolen in broad daylight while he was cutting the grass.

Thieves broke into his Warwickshire home and stole the keys for the car worth £110,000, before driving away with it.

The customer said: “I thought my car was gone for good. Thankfully, it was discovered at a supermarket car park in Leicester in less than two hours, which is a great result.

"It demonstrates the importance of Tracker’s relationship with police forces across the UK.”

Whereas, 32% of all stolen vehicles it recovered in 2016 were valued at less than £5,000. Tracker suggests that the age, mileage and even brand of a vehicle doesn’t matter to vehicle thieves as much as motorists may think, and should serve as a stark warning to the average car owner.

Tracker’s head of police liaison Andy Barrs said: “Luckily, this high value vehicle had been fitted with a Tracker unit and once police were aware of the theft, the device was activated.

“This case highlights the significance of having a tracking device fitted to your vehicle, as it can spell the difference between it being returned to you or thieves getting away with it and making a fast profit.

“An SVR unit won’t stop your car being stolen, but it can significantly increase the chances of police finding it if thieves do take it.”

The first trials of a vehicle tracker which uses the latest in smart internet technology have been launched in York.