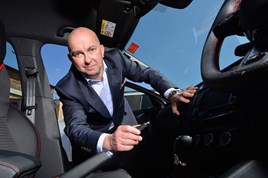 The first trials of a vehicle tracker which uses the latest in smart internet technology have been launched in York.

The V-Trak device uses inter-networking technology, known as the internet of things (IOT), to pinpoint a vehicle’s location and record driver vehicle performance and logistics.

It has been developed by Hednesford-based Stonelin Communications, which has already won the backing of telecom giant Orange for a trio of trackers it is designing, including the V-Trak, and is now looking for £1 million from investors to see the devices through to the market.

Autohorn Fleet Services operates a major car rental franchise serving the York area and also a nationwide car leasing operation, and four of the trackers will be trialled throughout its 1,500-vehicle fleet.

Scott Jenkins, Autohorn’s sales and operations director, said: “The four we have on trial will be moving around with our drivers as they go out to deliver or collect odifferent rental and lease vehicles.

“This means the V-Trak will get some really exhaustive frontline testing. We can use them to pinpoint where a driver is at any particular moment and use the information to update the customer on how long it will take them to arrive.”

The trackers can be operated simply by plugging it into a vehicle's cigarette lighter or USB socket.

Stonelin Communications is led by business partners Steven Stone in the UK and Dabin Lin in Hong Kong. They have already developed Pettorway, an IOTtracker for pets which has been sold across the world, including China, Malaysia, Brazil, India, America and the UK.

The device allows owners to track their pet’s activities and share that data about what their much-loved animal has been up to over a social network.

V-Trak is one of a trio of trackers being developed for different applications. The other two devices masterminded by the company are the D-Trak, for families dealing with the difficulties of looking after a relative with dementia, and the W-Trak, a time management system for domiciliary care workers.