British motorists are left baffled when driving abroad as 80% struggle to understand road signs, according to research.

Driving on the right-hand side of the road (59%), identifying foreign traffic signs (44%) and understanding foreign rules and regulations (51%) prove the biggest challenges for British holidaymakers.

Knowing the difference between kilometres and miles per hour also stresses a quarter (25%) of Brits out whilst driving abroad.

Of those surveyed, 89% have little to no understanding of foreign regulations and road signs, while 87% conduct no research into a country’s highway code before driving.

EasyJet and Europcar worked with Professor Stuart Cole, Professor emeritus of transport at University of South Wales to analyse over 800 road signs from across eight European counties to determine which territories  were the most confusing.

Cole said: “Unfamiliar roads can be daunting for Brits travelling abroad due to the lack of expertise in foreign regulations and road signs.

"European laws mean that many rules are similar, however, Brits should take the time to look through the traffic laws and signs of where they’re travelling to give them peace of mind to enjoy their trip”.

The research also revealed that Italian road signs cause the most confusion, according to 78% of British motorists, followed by Portugal (69%) and France (68%).

Of those surveyed, Brits weren’t aware of the following European driving rules and regulations: 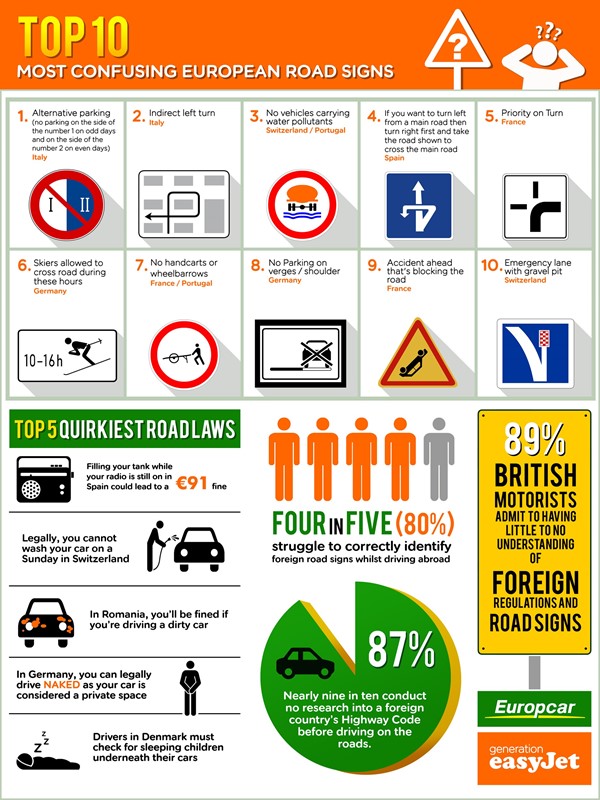 Half of drivers in a recent survey admitted they had been penalised for at least one traffic offence whilst travelling abroad.

Drivers planning on taking their company car abroad on holiday this summer have been urged to ensure that they have the correct documentation as soon as possible.

UK motorists taking their car abroad could be fined £117 if they don’t have an Air Quality Certificate (Crit’Air).