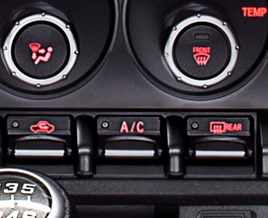 Business drivers are being warned not to rely on their vehicle’s air conditioning to cool a vehicle when setting off.

Cars parked in the sun can reach temperatures of 60 degrees, conditions which can diminish reaction times and cause dehydration.

According to Seat, common air-con mistakes – including immediately turning the system on full-blast – could be reducing its effectiveness, resulting in higher interior temperatures.

A difference of just 10°C inside the cabin can diminish reaction times by 20% – the equivalent to a blood alcohol reading of 0.05%; matching the Scottish limit and close to the maximum of 0.08% for the rest of the UK.

Seat outlines common mistakes with the use of air conditioning system:

Ángel Suárez, an engineer at the SEAT Technical Centre, says: “Open the doors and lower the windows for a minute before turning on the air conditioning to naturally lower the temperature in the interior.”

If passengers say they can’t feel the cool air, then the nozzles could be set incorrectly. “It isn’t a matter of temperature, but in which direction the air is flowing inside the car,” says Suárez.  “The nozzles should be pointing upwards, not towards peoples’ faces. Then the air flows all around the interior of the car and reaches every passenger consistently.”