RAC names Ben Aldous as its patrol of the year 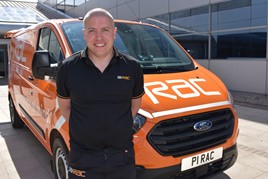 Ben Aldous has been named RAC patrol of the year just two years after joining the company.

The 33-year-old relocated from Norwich to Stockport in December 2016 to become an RAC breakdown patrol, having applied to the company four times before.

Just over 12 months later, he won the RAC Bright Beginnings Award and went on to achieve a vehicle fix of 95%: the RAC patrol average is 80%.

This was one of the performance criteria taken into account when judging the patrol of the year competition.

Aldous said: “It’s a fantastic honour to be named RAC patrol of the year. It’s one of the biggest achievements of my life.”

As part of his prize, Aldous gets to drive a new Ford Transit van with the number plate P1 RAC for the next 12 months.

The orange van is equipped with the company’s latest equipment including the All-Wheels-Up recovery system, which gives patrol vans flatbed-like recovery capability, and RAC EV Boost, a lightweight mobile charging system powered by the van developed by the RAC to get ‘flat’ electric vehicles on the road again.

On joining the RAC, Aldous – who then had a Level 2 qualification in Motor Vehicle Repair – enrolled in the RAC Development Academy for Roadside Technicians.

Under this 18-month apprenticeship scheme designed to take participants to Level 3, he passed his exams early with distinction.

The RAC has developed and launched a new type of trailer that provides flatbed recovery capability to its breakdown patrol vans.