Enterprise Car Club expands on the Isle of Wight 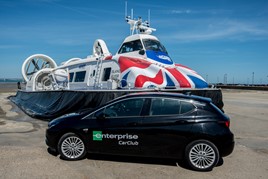 Enterprise will expand its Car Club operation on the Isle of Wight by adding two vehicles to a new location based at Hovertravel’s terminal in Ryde.

The move means that business and leisure travellers visiting the Island can “quickly pick up a car the minute they step off the hovercraft” with vehicles parked a few seconds walk from the landing area.

Enterprise claims the service is already appealing to the many SMEs who travel to the island.

The company is planning to add vehicles to Hovertravel’s terminal in Southsea later this year, allowing those travelling from the Island to also continue their journey seamlessly the other side.

"Car clubs are an excellent solution for the ‘last mile’ of a journey, when you’ve come off the hovercraft and you’re trying to get to a business meeting or a friend’s house.

"It means you can jump in a car when you need to, pay only for what you use, and rest assured that you’re driving away in a low-emission vehicle that is perfect for the job. I regularly use Enterprise Car Club and I’ve been very impressed with how easy it is to use.”

With vehicles located in Southampton and Portsmouth, where there are locations five minutes from the Red Jet terminal and from Enterprise’s branch in Fratton respectively,

Enterprise Car Club is aiming to offer a complete and joined-up travel solution for people going to and from the Island and the mainland.

Enterprise Rent-A-Car’s general manger for south central England Paul Smith said: “The Isle of Wight is a location where the benefits of Enterprise Car Club really come into their own, allowing people to cross the Solent and have a car waiting the other side – while avoiding the costs of taking a vehicle to or from the Island.

“Due to this, the service has proved really popular with Islanders and visitors alike since we launched in West Cowes and Newport in 2017 and as a result, we are expanding to cover more of the Island’s transport hubs.

"The increased presence of Enterprise Car Club vehicles at the island’s sea terminals also means that fewer visitors need to bring their cars over, reducing vehicle congestion on the Island.”