DVSA tests on a range of Euro 6 vehicles found some fully homologated vehicles meeting the legislated laboratory tests produced up to 20 times the NOx emissions limit during the WLTP track test.

This means that city policy makers who are using, or plan to use, Euro 6 as the emissions standard for their clean air zone will be unable to stop over-emitting cars adding to poor urban air quality, says AIR Index, an independent, standardised on-road emissions rating system.

Nick Molden, co-founder of the AIR Index, said: “Cities who in good faith are using or plan to use Euro 6 as the threshold for access policies will not deliver the air quality improvements expected and will not solve their breach of urban air quality in the time required.

“The DVSA’s latest test results confirm the importance of independent testing to provide confidence and transparency about actual emissions during on-road driving.

“We welcome the government’s publication of this report which aligns with the results of vehicles rated for the AIR Index, and it highlights again that not all Euro 6 cars control NOX emissions to the same degree.”

The DVSA’s tests show that during WLTP track tests the Nissan Qashqai diesel was found to be more than 17 times the legislative limit for NOx and the Renault Kadjar diesel was 13 times the same limit.

Diesel versions of models within the ranges of the BMW 1-series, Hyundai Tucson, Jaguar F-Pace, Vauxhall Astra and Volvo XC60 were all found by DVSA to be multiple times higher than emission limits for the legislated test cycle.

The only car tested by DVSA and found to be within the limits was the Mercedes E-Class diesel.

Mike Hawes, SMMT Chief Executive, said, “As government testing has yet again shown, new cars are fully compliant with emissions regulations. The new official emissions testing regime - the toughest in the world - fully demonstrates this, not only in the lab but also on the road, and it provides consistent and reliable information to car buyers to help choose the right model.” 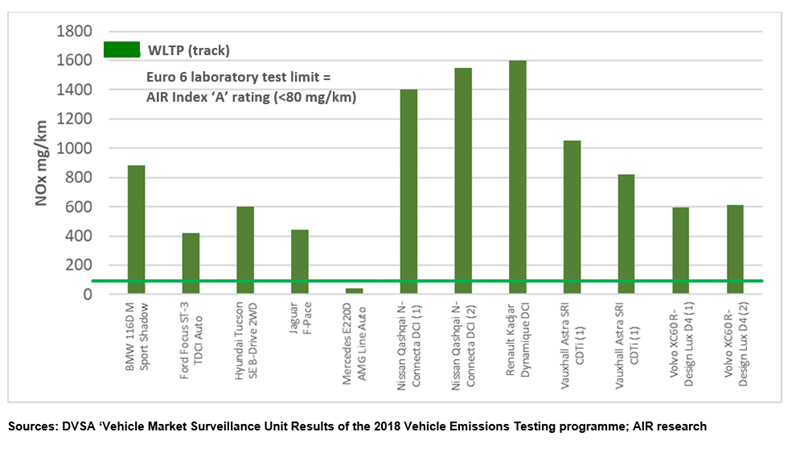 A new standardised emissions rating system which allows fleet managers to see how much pollution a vehicle produces when used in urban areas has been launched.

Bristol City Council has launched a public consultation to establish which air quality measures it will introduce.

Nissan has decided to ignore the government’s suggestion for emissions modifications to thousands of its polluting Qashqai models.