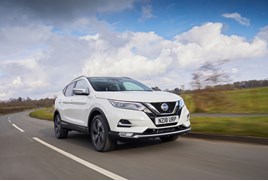 Nissan has come under fire from environmental groups after opting to ignore a Government recommendation for emissions modifications to be made to thousands of its popular Qashqai models.

DVSA asked Nissan to retrofit the vehicles in order to reduce their emissions, following similar moves made by other manufacturers.

Nissan responded by saying it was “not possible to do a recalibration for existing customers”.

In its report, the DVSA said: “We find Nissan’s approach on addressing these extremely high-emitting vehicles unacceptable.”

Renault, which uses a similar 1.5-litre diesel in the Kadjar, is planning to make the modifications.

Vauxhall was also highlighted in the report and has agreed to make free adjustments to all of its EU-sold Astras, including almost 14,000 sold in the UK.

Andrea Lee, a member of the clean air team at campaign group ClientEarth, said: “Diesel car manufacturers have never been held to account for contributing to the illegal and harmful levels of air pollution in the UK.”

From September 1, 2019, all new cars sold in the UK will have to meet 'real driving emissions' standards which put limits on the amount of nitrogen oxides that can be emitted.

With the new tests in place, the DVSA tested nine diesel cars and found that older models of the Qashqai breached the limits.

The DVSA explained “We remain concerned by the poor real-world emissions control of a number of the vehicles we tested this year.”

The emissions contribute to the air quality issues, which causes health problems.

The company updated the engine in summer 2018 with a selective catalytic reduction system which it says complies with current emissions regulations.

In the last 10 years, Nissan has made more than 3 million Qashqais at its north-east Washington plant in England.