Vehicle thefts rise by more than 50% 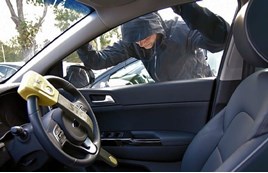 Vehicle thefts have risen to highest level in four years, as more than 150,000 cars, vans and motorcycles were reported as stolen in 2018-19.

It’s an increase of 10,000 vehicles when compared to the year before and a 56% (54,932) increase compared to four years earlier, according to data analysed by RAC Insurance.

All but three of the police forces that responded to a Freedom of Information request recorded an increase in the numbers of vehicles stolen in their force areas from 2014-15 and 2018-19.

Only Lincolnshire, the City of London and Police Scotland recorded a reduction in thefts during this period, with reductions of 28, 29 and 473 thefts respectively.

RAC Insurance spokesperson Simon Williams said: “These figures paint a rather disturbing picture – vehicle thefts are on the rise almost everywhere, and in some parts of the country numbers are rocketing.

“It’s also not the case that the rises in crime are confined to a few larger urban areas, with many police forces covering more rural areas also seeing big increases.

“While vehicle crime is at far lower levels today than it was in the early 1990s, thanks to improvements in vehicle security, and the number of vehicles licensed to be driven on the UK’s roads is higher than at any point in the past, it’s still concerning that so many more vehicles are being stolen than just a few years ago.”

Its research found that businesses have at least one vehicle stolen each year.

The average loss increases to nearly £50,000 for those businesses that have between 101-250 vehicles, as the number of vehicles stolen rises to three for businesses of this size.

Some of the increases in recent years can be put down to a rise in thefts of vehicles that are easier to steal, such as motorbikes and mopeds that are less likely to have immobilisers. Government data also shows that thieves generally use keys to access vehicles in around half of crimes, which suggests that drivers need to do more to keep their keys safe.

Tracker data suggests that nine out of 10 van thefts were performed using the keys.

In a fifth of cases (18% in 2018), thieves were able to access vehicles because they weren’t locked in the first place.

Company car drivers and fleets are being warned by Tracker to be wary of opportunistic criminals looking to steal cars to fill a replacement parts gap caused by COVID-19.

The stolen vehicle recovery company says that police across the country are already fighting an increase in ‘chop shops’ – where stolen vehicles are stripped down and expensive parts sold on. But, it argues, the lack of legitimate parts could increase their popularity and profitability still further.