Self-driving cars “10, 15 years away" from being reality, "maybe never” 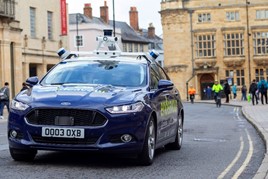 Fully self-driving cars becoming a regular sight on UK roads could be “10 or 15” years away, “maybe never”, says the consortium leader of a major autonomous vehicle trial currently taking place.

Project Endeavour is the UK’s first multi-city demonstration of AVs and is jointly funded by industry and Government.

It has built six self-driving vehicles, based on Ford Mondeos, and started operating them on a public loop in Oxford in November.

Graeme Smith, consortium leader for Project Endeavour and senior vice-president at Oxbotica, said: "When most people think about autonomy they think about passenger cars and, in reality, that’s many years away, maybe 10 or 15, maybe never.

"We are a long, long way away from any vehicle that’s able to be autonomous anywhere in the world at any time.

"Just because a vehicle can drive on the public road doesn’t mean it can drive on a construction site or a mine or under the sea.

"Everything is restricted to a domain, so the answer to the question about when will we start to see this technology is not black and white because you can see autonomous systems happening around us already.

"For example, London’s Docklands Light Railway has a driverless train. That’s in a very limited domain: it’s on a track, it doesn’t need maps to operate.

"Over the next few years, we will start to see AVs being used in areas such as mining and construction.

"There are also industrial environments that are simple and easy to operate in, and then there are areas not on public roads where you could use multi-people shuttles and these will start to happen in the next five or so years.

"After that, maybe six or seven years, we’ll probably start seeing robotaxi-type vehicles operating in certain places, but it will be many years before the technology is ubiquitous."

For the trials, Oxbotica is providing the autonomous vehicle software and the vehicles.

Immense is providing citywide AV simulations and DG Cities is working together with Oxfordshire County Council to help develop and refine engagement models with local authorities. Finally, we have partners like TRL and BSI who are working on a safety assurance work package.

For more on Project Endeavour, the future of autonomous vehicles and other trials taking place in the UK, look out for the feature in the January issue of Fleet News, available in print or digital edition

Nissan is working as part of a new consortium to help develop a blueprint that will help cities across the UK introduce autonomous vehicle.