Two men killed in Tesla with no driver 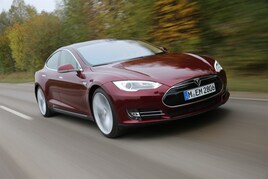 Two men have died after the Tesla they were travelling in hit a tree in Texas at the weekend. Police believe no one was driving the vehicle at the time of the impact.

The car, a 2019 Model S, then burst into flames. The emergency services took four hours to extinguish the blaze and used more than 100,000 litres of water, according to reports.

Both occupants, said to be in their 50s, were found in passenger seats of the vehicle. One in the rear and one in the front. The incident happened less than half a mile from the owner's property.

Investigators believe the driver may have activated the car's Autopilot mode – Tesla’s driver assistance function which can control steering, acceleration and brakes within lanes on motorways - before switching seats.

Tesla chief executive Elon Musk claims the car was not using Autopilot at the time and was not equipped with the brand's Full Self Driving (FSD) package.

Tesla has repeatedly faced criticism for the way it markets its assistance systems as ‘self-driving’. Last year, German courts banned the manufacturer from making such claims.

It’s common for Tesla owners and fans of the brand to share videos clips or images of Tesla models supposedly driving themselves, with one American woman filming her child asleep in the driver’s seat of a Model 3 while it travelled on the motorway.

Speaking to Autocar Magazine, Matthew Avery, research director at Thatcham Research, described the Texas crash as “an incredibly sobering illustration as to why education and correct naming are so important to the safe use of driver assistance systems”.

He said: “A lack of understanding of system capability is causing confusion around driver responsibility, and accidents like this sadly back that up. System names should not be misleading.”

In February 2020, an investigation into a fatal crash involving a Tesla Model X being driven on Autopilot in Mountain View, California, found that the driver was distracted using his mobile phone.

It was determined that the Tesla Autopilot system’s limitations, the driver’s overreliance on the Autopilot and the driver’s distraction – likely from a mobile phone game app – caused the crash.

An investigation into a fatal crash involving a Tesla Model X being driven on autopilot has found that the driver was distracted using his mobile phone.

Tesla expanded its UK dealer network to 25 sites during 2020 and plans further growth in 2021.