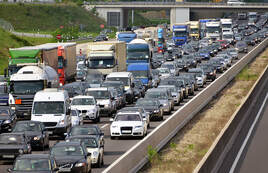 Traffic levels are expected to reach an eight-year high this Easter, as millions of UK motorists hit the roads for a spring getaway.

Data from the RAC suggests drivers are planning more than 21 million journeys, the highest number for an Easter bank holiday since it first started tracking motorists’ plans in 2014.

Good Friday – the first bank holiday since the start of the year – looks set to be the single busiest day of the long weekend with drivers planning in the region of 4.62m separate leisure trips, followed by bank holiday Monday (3.96m) with Saturday and Sunday each seeing around 3.63m journeys by car.

An additional 5.6m trips are estimeated to be taken by drivers at some point between Friday and Monday.

Major engineering works to railways between London and Birmingham is likely to push more people onto the roads, including those making their way from Manchester and Liverpool to Wembley to watch the semi-final of the FA Cup on Saturday.

Expected rail strikes in Scotland and the north of England could also make matters worse.

INRIX data suggests that the M6 north between Liverpool and the Lake District, south towards Stoke-on-Trent, the M25 between Surrey and the M40 exit, and the A303 near Stonehenge could see some of the worst congestion, with drivers urged to set off as early as they can or to delay their trips until the end of the day to stand a better chance of a smoother journey.

RAC traffic spokesperson Rod Dennis said: “After two years of relatively quiet Easter bank holidays on the roads, our research suggests a return to traffic levels that are much more typical of this time of year, and it’s very possible this weekend could turn out to be one of the busiest for leisure journeys for many years.

“Add in the impact of disruption on the rail network and one of the biggest fixtures of the sporting calendar taking place this weekend and you have all the ingredients needed for problems on the roads. Traffic volumes will likely be even higher if some warm spring sunshine makes an appearance.

“The key to avoiding the worst of any jams is planning. Put simply, the earlier you leave in the morning the more likely you are to miss the worst of the queues, especially if you are travelling a longer distance – although a fifth of drivers we polled said they were planning on driving shorter distances this Easter, specifically because of the extremely high cost of petrol and diesel at the moment.”

Drivers face the costliest Easter on record when it comes to petrol and diesel prices with 6% of drivers saying they’re not planning a car trip at all over the weekend for this very reason.

Separate research by the RAC suggests that the high pump prices might affect people’s trips in other ways – one-in-five drivers (20%) said they plan on driving a shorter distance this Easter than in previous years, with the same proportion saying they’ll be cutting back on other Easter expenditure because of high petrol and diesel prices. More than a quarter (28%) said they’re planning on using their cars less, while a third (33%) will be deliberately driving more economically to try to keep their Easter fuel spending down.

The RAC is urging drivers to ensure their cars are prepared for long journeys, to minimise the chances of a breakdown.

RAC research found that only a fifth of drivers (19%) say they always check their cars are ‘road-ready’ before making an Easter trip, increasing the potential for breakdowns to ruin the start of many people’s breaks.

Half of drivers (51%) said they sometimes checked their cars over before setting out but an alarming 30% said they never do. The RAC says spending just a little time checking a vehicles’ oil, coolant and tyres can prevent a very inconvenient breakdown.

Dennis added: “As well as leading to queues of traffic, vehicle breakdowns also have the potential to ruin the long weekend for drivers and anyone they’re travelling with, so we’re urging people to make sure they’re vehicles are ‘road-ready’ before setting out.

“This is even more important for anyone travelling longer distances than they have for several months.”

National Highways customer services director Melanie Clarke said: “This is the first bank holiday of the year, so we expect the roads to be busy with people looking to make the most of a long weekend. To help keep disruption to a minimum, we’re lifting more than a thousand of miles of roadworks.

“The last thing anybody wants on the way to their destination is to have a vehicle breakdown. That’s why it’s really important people spend a few minutes checking the condition of their tyres before setting off.”

Nationwide Vehicle Contracts has shared five tips for drivers that do get stuck in traffic queues:

1.Stay in your car

It is advised by the police and AA that you do not get out of your vehicle in a traffic jam as you could be a potential risk to emergency vehicles and motorcycles driving in between cars.

2.Do not use your phone

Since March this year, drivers are not allowed to handle any mobile device when driving including being stationary in traffic, such as at traffic lights or motorway queues.

3.Switch off your engine

This will help you save fuel and benefit the environment.

4.Listen to your radio

Turn on your radio, not just for entertainment but also to keep up with regular travel updates.

If you have passengers in your vehicle you can pass the time by playing classic road games such as I Spy, the word association game or the number plate game.

Keith Hawes, director of Nationwide Vehicle Contracts, said: "Prepare yourself and your car for the worse if you do travel during peak times. Make sure to fill up on fuel before your trip and pack drinks, snacks, extra clothes and other suitable items you might need if you do get stuck for a long period of time in your vehicle."

Birmingham City Council’s cabinet will vote on closing roads to through traffic and introducing a fleet of zero-emission buses on October 12.