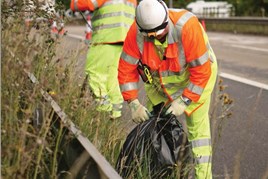 People throwing rubbish out of the window of their car is the number one summer pethate, according to a new AA Populus poll.

More than one quarter of drivers (28%) say it’s their biggest bugbear and figures from Highways England have highlighted the scale of the problem. In the past three years, there has been more than 364,000 bags of litter collected from England’s main roads. That is more than 330 bags collected a day, and each bag roughly costs £40 to tax payers. The total sum spent on collecting rubbish from the roadside is more than £14,500,000.

Edmund King, AA president, said: “Car litter louts are a needless menace who cost the country millions, spoil our environment and put road workers’ lives at risk. There is no excuse for tossing out litter. Car occupants should bag it and bin it at home.”

The next most annoying thing during the summer for drivers is large groups of cyclists cited by 21% of men and 23% of woman.

King continued: “Many of the other pet hates concerned groups slowing drivers down by being lost, slow or indecisive. Drivers need to be more patient in the summer on the roads because anything can happen.”