Drivers could be fined for litter lout passengers 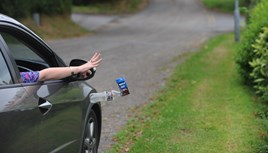 Drivers will be fined automatically if litter is thrown from their vehicle, even if a passenger is to blame, according to reports.

The Government wants litter thrown from cars to be treated in the same way as speeding, with the registered keeper held responsible unless someone else comes forward to admit the offence.

Fines for littering from a vehicle could also be increased from £75 to £125 in England under a new strategy being drawn up by the Department for Environment, Food and Rural Affairs (DEFRA).

Neal Boland, senior partner at national law firm Stephensons, said: “The proposals would bring the problem of littering from a vehicle in line with how similar offences are treated when a person is on foot.

“At present, local authorities have the discretion to issue a range of fixed penalties to anyone found littering within their jurisdiction. This usually amounts to an £80 fine, though this climbs to £2,500 if the offer of a fixed penalty is refused and the individual is found guilty in court.

“However, in instances where the offence of littering is committed from a vehicle, the person responsible will often simply drive away making issuing a spot-fine all but impossible.

“Therefore, the proposals would work much like a speeding offence. Any fine would be issued directly to the registered keeper of the vehicle, regardless of whether it was them – or a passenger – who was responsible for the litter.

“It would then be down to the driver to either admit to the offence and pay the prescribed fine; challenge it in court; or nominate the passenger who was actually at fault.

“Unlike speeding offences however, there seems to be no indication that a littering offence will result in endorsements – points – on the driver’s licence; though there might be instances where throwing litter from a moving vehicle could be considered ‘driving without due care and attention.”