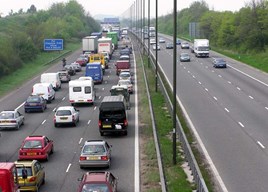 The Government has given the green light for learner drivers to have lessons on motorways in a bid to improve road safety.

The change in the law will come into from 2018, when learners will be allowed on motorways with an approved driving instructor in a dual control car.

Currently learners cannot drive on a motorway until after they have passed their test. This means the first experience of motorway driving for many is as a new driver without the guidance of a driving instructor or the safety of a dual control car.

Transport secretary Chris Grayling said: “Younger drivers are up to seven times more likely to be killed or seriously injured compared with drivers over twenty-five and lack of experience is an important factor.

“Allowing learners to drive on motorways in a supportive environment will help them develop a practical understanding of how to use motorways safely before driving independently.”

RAC road safety spokesman Pete Williams welcomed the announcement. He said: “While motorways are statistically our safest roads, it can be daunting using them for the first time after passing the driving test.

“Giving learners the option to gain valuable experience on our fastest and busiest roads should further improve safety and enhance the confidence of new drivers.”

Neil Greig, IAM RoadSmart director of policy and research, added: “It makes no sense that new drivers learn by trial and, sometimes fatal, error how to use our fastest and most important roads.

“Allowing learners on motorways with an approved instructor is a sensible and measured solution that should deliver confident new drivers who are much better able to cope with complex smart motorways.”

However, the road safety charity Brake believes the changes do not go far enough. Jason Wakeford, director of campaigns for Brake, said: “Rather than allowing learner drivers on the motorway, there should instead be a requirement for all newly-qualified drivers to receive mandatory lessons, including on the motorway, once they've passed their test.

“There needs to be much wider reform to the learning to drive system, including a minimum learning period and restrictions for newly-qualified drivers, such as a late night curfew. This graduated driver licensing approach has helped dramatically reduce road casualties in countries including Australia, and could save lives here in the UK too.

"There should also be better access to affordable public transport so fewer young people see starting driving in their teens as a necessity."