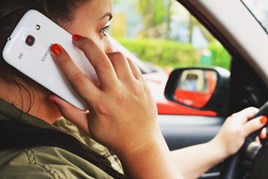 A year after tougher penalties were introduced, one in five employers say their drivers have been involved in a crash after using a handheld phone at the wheel.

The research from RAC Business reveals that 15% of businesses admit their drivers are ‘often involved’ in accidents while using a handheld phone, with 5% reporting it happened ‘on a regular basis’.

RAC Business said one of the contributing factors could be that four in 10 (38%) businesses said they expect commercial drivers to answer calls while on the road. For larger businesses (500 to 1,000 employees) that figure rises to 49%.

Rod Dennis, from the RAC’s Be Phone Smart campaign, which was launched to encourage motorists to pledge not to use their handheld phone or smart device at the wheel, said the law is clear on the issue.

“The use of hands-free kits is within the law and that can provide a legal and safer solution for businesses, which is how many different businesses operate.

“If employers expect their company drivers and staff to take calls on the road, which 38% admit they do according to our research, then they should be providing legally compliant hands-free kits so they can do that without breaking the law.”

The findings from a survey of 1,000 UK businesses, carried out across all fleet sizes and sectors, comes a year after increased penalties were introduced for using handheld phones at the wheel on March 1, 2017.

The penalties for the offence doubled from £100 and three penalty points to £200 and six points.

Since then, more than 26,000 motorists have been caught using a handheld mobile phone. Among these were 500 novice drivers who have had their licences revoked for using their phone behind the wheel in their first 2 years of driving.

Road safety minister Jesse Norman claimed: “The penalties for holding and using a mobile phone while driving have proven to be a strong deterrent, and more and more people are aware of just how dangerous this is. But some motorists are still not only putting their own lives at risk, but the lives of others.

“Everyone has a role to play to encourage drivers to put their phone away and not use it while at the wheel.”

A further 1,997 motorists were handed fines as part of a national crackdown by traffic officers between 22 and 28 January 2018, which was choreographed by the National Police Chiefs’ Council. Of those caught, 74% were male.

National lead for roads policing, Chief Constable Anthony Bangham said: “In the year since the new legislation was introduced, we have started to see changes in driver behaviour as the public begin to understand the impact that driving whilst using a mobile phone can have. However, there are still far too many people underestimating the risk that they take when using their mobile phone at the wheel.

“We used intelligence to identify hotspots and repeat offences to stop over 3,000 drivers in one week, 66.5% of which were committing a mobile phone related offence.

“It is not just about the penalty points or the fine, it is about putting safety first and keeping your eyes on the road so you don’t risk hurting or killing an innocent person.”

In terms of the RAC Business research, one of the contributing factors to mobile phone use while driving could be that four in 10 (38%) businesses said they expect commercial drivers to answer calls while on the road. For larger businesses (500 to 1,000 employees) that figure rises to 49%.

However, almost a third (30%) of businesses of all sizes don’t provide legally compliant hands-free kits and 20% have no policy for mobile phone use while driving.

The results of the survey have prompted calls from RAC Business for fleets and business owners to highlight the dangers of using a handheld phone at the wheel to their employees and to make sure they have a policy in place for the use of phones while driving for work.

Dennis said: “Our survey says 70% of employers do provide hands-free kits, but in our view that still needs to be much higher, and every business should have a clear code of conduct or policy for drivers.

“However just because it’s legal to use a hands-free kit, it doesn’t necessarily means it’s always safe to do so, and it certainly shouldn’t be used to have long conference calls or to proactively make lots of calls on a long journey.

“It should always be down to the driver in terms of how they feel about taking a call and they should only do so if they judge it to be safe and not causing them a distraction.

“In the same survey we asked businesses whether it was important to uphold their ‘duty of care’ towards their company drivers and 92% agreed it was.

“Therefore businesses need to have a policy in place which is not only clear in the expectations of their drivers, but also needs to have a high profile in the business to ensure the message is getting through.”

To coincide with the first anniversary of the new penalties, the road safety campaign Think! is highlighting the chances of being caught in adverts, which will appear on radio, social media, on demand video and in shopping centres, as part of its ongoing campaign to raise awareness of the dangers.

A year after tough new penalties were introduced, research from SmartWitness suggests that drivers are still prepared to use their phone while driving.

UK motorists remain “undeterred” by fines for using a mobile phone at the wheel, with almost 12,000 drivers a year prosecuted.