BT fined £90,000 for putting public at risk during streetworks 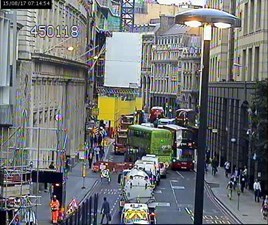 British Telecom (BT) has been prosecuted by Transport for London (TfL) for putting the public at risk during streetworks in London, with the telecommunications giant ordered to pay a record £90,000 fine.

During works at Bishopsgate in August 2017, part of TfL’s strategic road network, BT failed to properly sign and guard the work area and also used the wrong traffic management methods.

Despite repeated demands by TfL, BT also failed to take actions to improve the situation, leading to unsafe conditions for road users, pedestrians and cyclists.

BT pleaded guilty to the unsafe execution of streetworks, with significant risk to public safety, at Westminster Magistrates Court on March 28. It was was fined £90,000 and ordered to pay a further £3,394 in court costs.

It is the second time in 12 months TfL has taken the utility company to court for unsafe working practices as part of its commitment to tackle poorly managed, or unsafe roadworks.

The prosecution follows unsafe work carried out on Streatham Hill, Lambeth on March 1 2017. In this instance, BT failed to properly sign and guard the working area, which meant that pedestrians were able to walk dangerously close to heavy plant and machinery.

In passing sentence, the District Judge said: "There is clearly a disconnect between BT and its contractors, consistently resulting in a number of these breaches, which must be fixed by BT to avoid future offences.

“It took over a day for BT to rectify these faults despite the works taking place in a busy part of the City of London with substantial impact on traffic. The response was unacceptably slow in my view and I hope that is reflected in my sentence.”

Glynn Barton, TfL’s director of network management, said: “The safety of the public and workers should be top priority when undertaking roadworks. We have prosecuted BT for streetworks offences 47 times since 2010 and they still continue to breach the rules.

“It is absolutely vital that companies such as BT ensure safety on site and we will always push for the strongest possible action against those that put the public at risk.

“We are working with utility companies, including BT, to ensure that roadworks are carried out safely in the future, with minimal disruption to road users.”

Since 2010, TfL has issued BT over 1,066 Fixed Penalty Notices and has prosecuted the telecommunications company 47 times for streetworks offences, including those for dangerous and disruptive work.

The below table sets out the number of times TfL has successfully prosecuted utility companies since 2010:

Transport for London (TfL) has prosecuted BT as part of its roadworks standards enforcement programme.

BT prosecuted for the fourth time by TfL

BT has been ordered to pay more than £10,000 after TfL prosecuted the telecoms giant for two serious safety breaches that put public safety at significant risk.

BT fined for the second time in 12 months by TfL

BT has been fined £25,000 after Transport for London prosecuted it for serious lapses in safety, which put the public at significant risk in Lambeth.