Company car drivers are being advised to select a car that has not yet undergone the new WLTP emissions test, in order to minimise tax bills.

By September, all new cars have to be re-tested under the new real-world conditions – often resulting in lower mpg and higher CO2 figures.

The transition period from NEDC to WLTP started in September 2017, therefore car types approved before this date, continued to have CO2 values measured under the old NEDC test, as manufacturers can continue selling these cars until August 31, 2018.

“For new employees joining a business today and entitled to a company car as part of their remuneration package are best advised to select a vehicle that is available now and has been tested under NEDC protocols as the tax burden will almost certainly be lower than an NEDC-correlated car or one tested under WLTP rules,” said Gil Kelly, operations director of Venson Automotive Solutions.

In contrast, Zenith announced last week that it has removed all non-WLTP tested models from its quoting platform to avoid confusion.

Any new model certified according to WLTP after September 2017, the official vehicle documents (the Certificate of Conformity) will have CO2 emission values from both the new laboratory test (WLTP) as well as the NEDC-correlated figure.

Venson Automotive Solutions says car types approved before the deadline will continue to have CO2 values as measured under the old NEDC test.

Kelly said: “Since the start of the transition period, a fleet manager might come across three different values for the same car.

“While the quantity of those models approved before September 2017 are low, it still makes it confusing for fleet buyers to compare vehicles CO2 values and tax costs.  In addition, increases in vehicle taxation by the government for 2018/19 and beyond on current models, will suffer the most from tax rises as they go through WLTP testing, when CO2 emission and MPG figures are converted back into NEDC-correlated numbers.”

WLTP-derived (NEDC correlated) figures that have been published by manufacturers suggest an average CO2 increase of around 10% or 10-15g/km.

“Experts have suggested that CO2 emissions under WLTP testing on a car-by-car basis will increase by around 20% with MPG reducing by a similar amount,” Kelly added.

“However, those figures are only ‘guesstimates’. Therefore, it is important to remember that the NEDC-correlated figures are likely to be a ‘halfway house’ between the ‘old’ NEDC figures and the WLTP figures, will not be used for tax purposes until April 2020.”

The figures in the chart indicate how CO2 – and where available MPG – have changed: 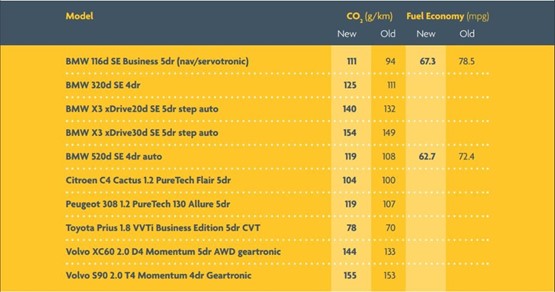