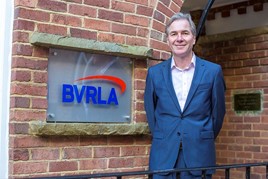 The British Vehicle Rental and Leasing Association (BVRLA) has welcomed the range of electric vehicle (EV) grants and tax incentives in the Budget.

The trade body believes the measures announced in today’s Budget will provide a major boost for those looking to speed-up the transition to zero-emission transport.

BVRLA Chief Executive Gerry Keaney (pictured) said it showed the Government is “listening and is ready to support those that are ambitious enough to embrace its decarbonisation targets”.

BVRLA members purchase nearly half of all new vehicles sold in the UK and are responsible for around a third of all EV registrations every year.

In the run up to this year’s Budget, the trade association and its members had emphasised the importance of having a long-term transport decarbonisation strategy focussed on grants, tax incentives and infrastructure, that would give fleets and drivers the confidence to commit to a zero-emission future.

Retaining the much-needed Plug-in-Grant, helping businesses with the cost of connecting charge points to the grid, providing long-term certainty around company car tax and making zero-emission cars exempt from Vehicle Excise Duty (VED) were all BVRLA policy asks that have been granted (read more about the measures announced in the Budget here).

The Government also announced that it was launching two major new reviews – a call for evidence on how VED can be used to support uptake of zero and ultra-low emission vehicles, and an electric vehicle charging infrastructure review.

Keaney said: “Tackling road transport emissions and improving air quality is top of the agenda for government, industry and society.

“The plug-in car grant and VED measures outlined today will play a massive role in making EVs more affordable for thousands upon thousands of businesses and drivers across the UK.

“Having a roadmap for the future of company car tax up to 2025 removes the uncertainty that we know stifles business decisions.”

As well as being the UK’s largest purchaser of new vehicles, the vehicle rental and leasing industry is also the largest single supplier of nearly new vehicles, selling 1.5 million vehicles annually into the second-hand market.

The latest 2019 data shows that vehicle rental and leasing companies are already leading the transition to cleaner transport, with 100% of the car rental fleet and 96% of leased cars being Clean Air Zone-compliant.

These compliance figures are well ahead of the average for all UK cars, where only 62% meet CAZ emission requirements.

The results are even starker for commercial vehicles as only 21% of the UK van fleet is currently CAZ-compliant, compared to over two-thirds (67%) of all leased vans and 88% of the rental van fleet.

Keaney explained: “With an average fleet replacement cycle of 1-3 years, the vehicle rental and leasing industry is ideally placed to drive rapid EV-transition in the UK and we will use these fiscal incentives to continue to lead the way in driving the shift towards cleaner road transport.”

Read more from Fleet News about the future of the plug-in car grant for electric vehicles by clicking here.

The Chancellor has announced new company car tax rates in a Budget dominated by measures to soften the impact of Coronavirus.